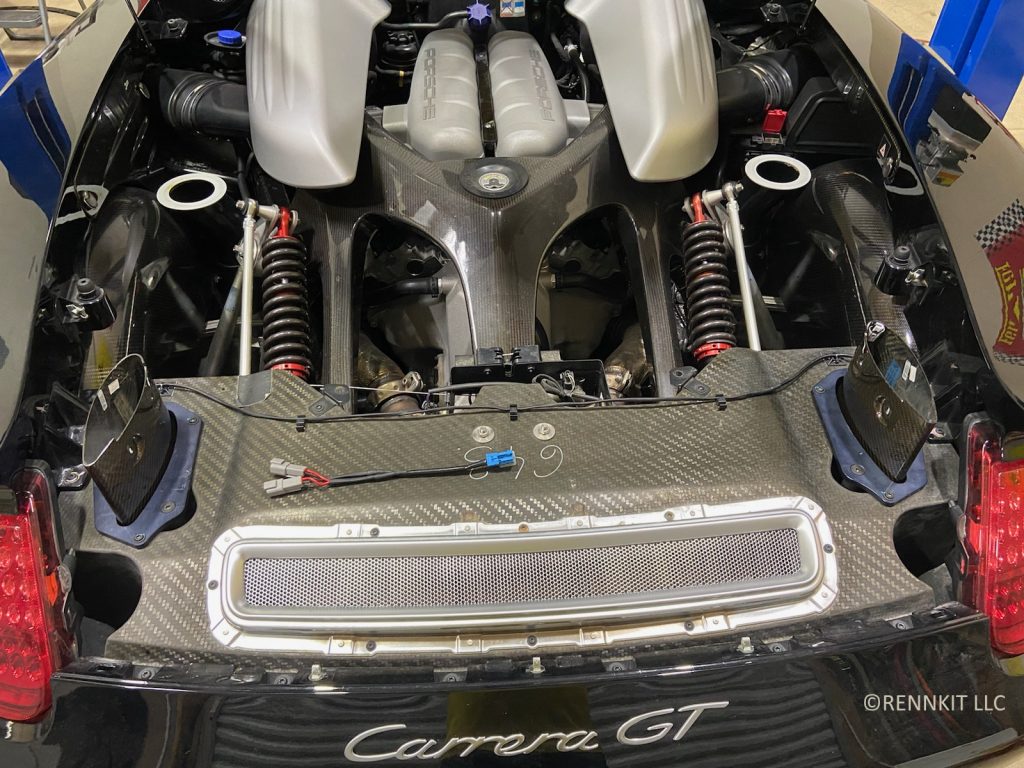 We offer the only PERMANENT SOLUTION for the overly complex and troublesome factory hydraulic mechanism.

Your Porsche® dealer wants $30,000 to
replace the hydraulic mechanism!

LOOKS AND FUNCTIONS EXACTLY THE SAME as the factory’s overly complex elevator mechanism. The world’s ONLY patented, economical and permanent solution for a fully functional wing! The Carrera GT eRam Kit™ consists of two self-contained electric rams that replace the unrebuildable hydraulic cylinders within each wing upright. The entire hydraulic system is removed to save precious weight. Upgrade from the troublesome factory hydraulic mechanism to the safer, simpler, lighter yet more robust eRam Kit™. 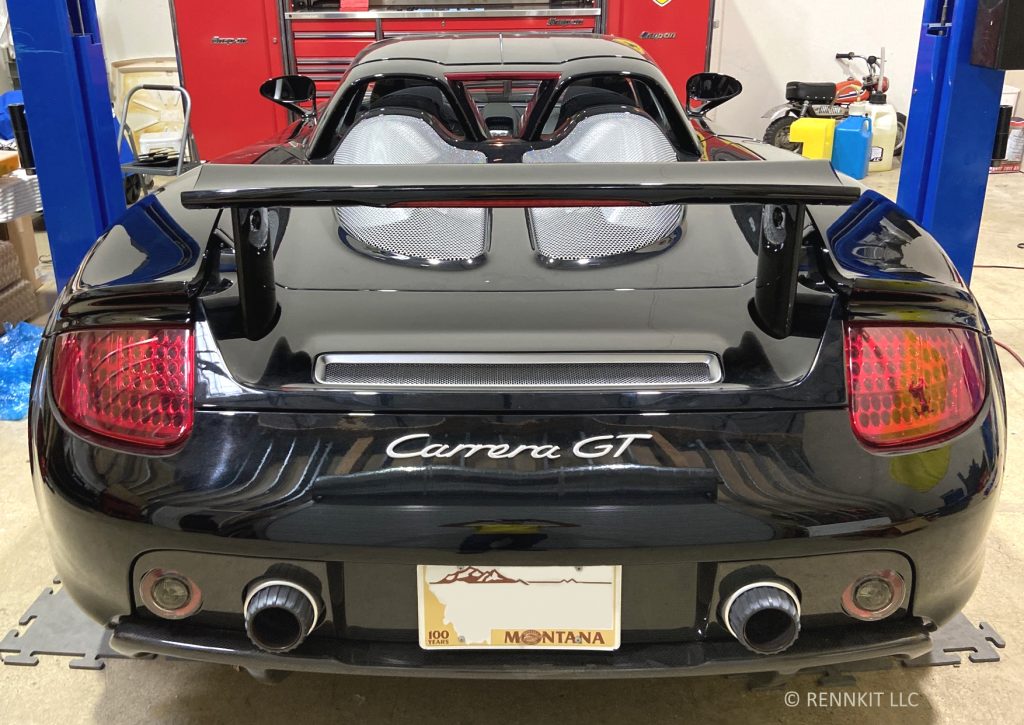 This is the overly complex and troublesome factory mechanism (note left elevator does not go up): 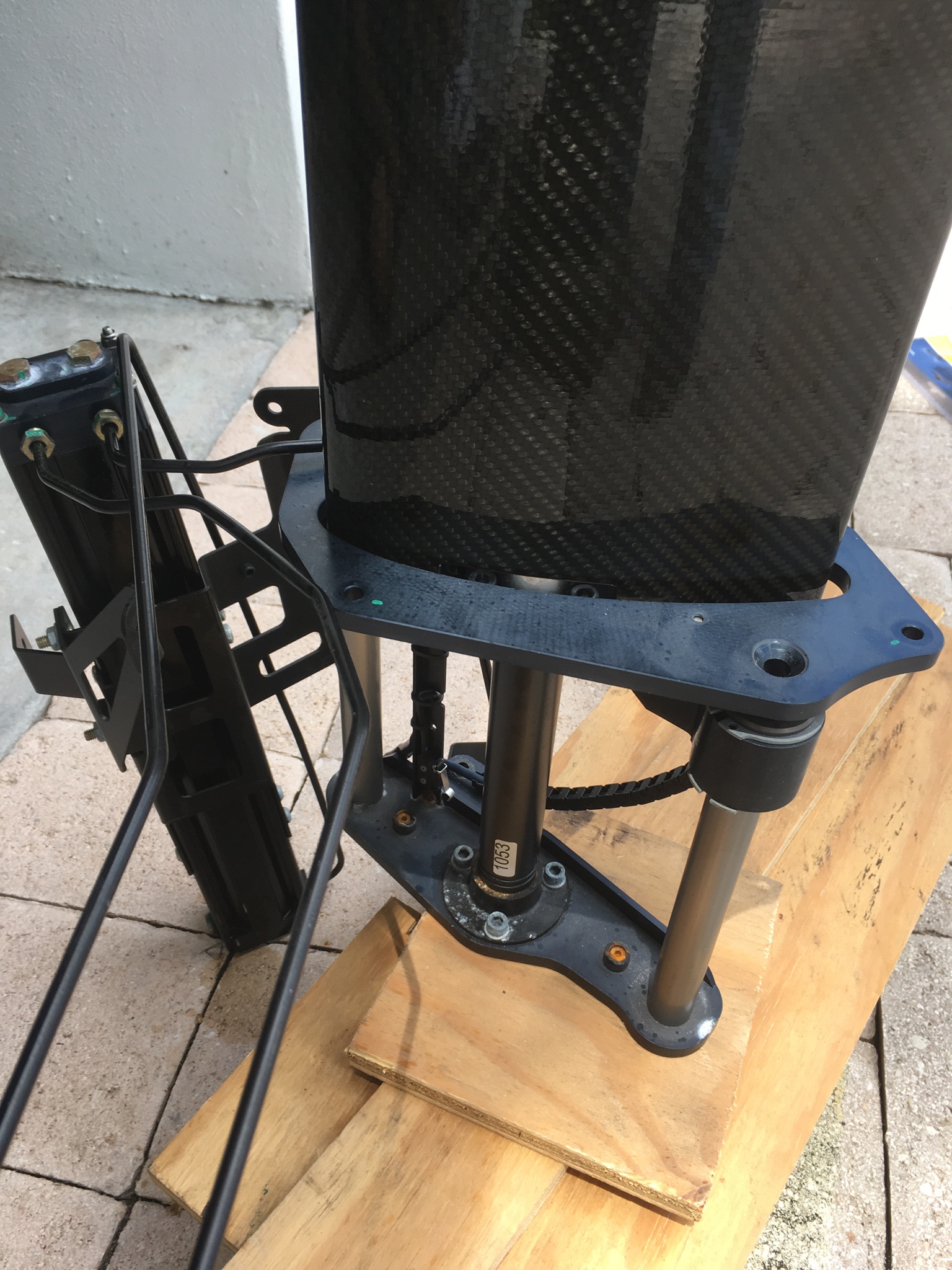 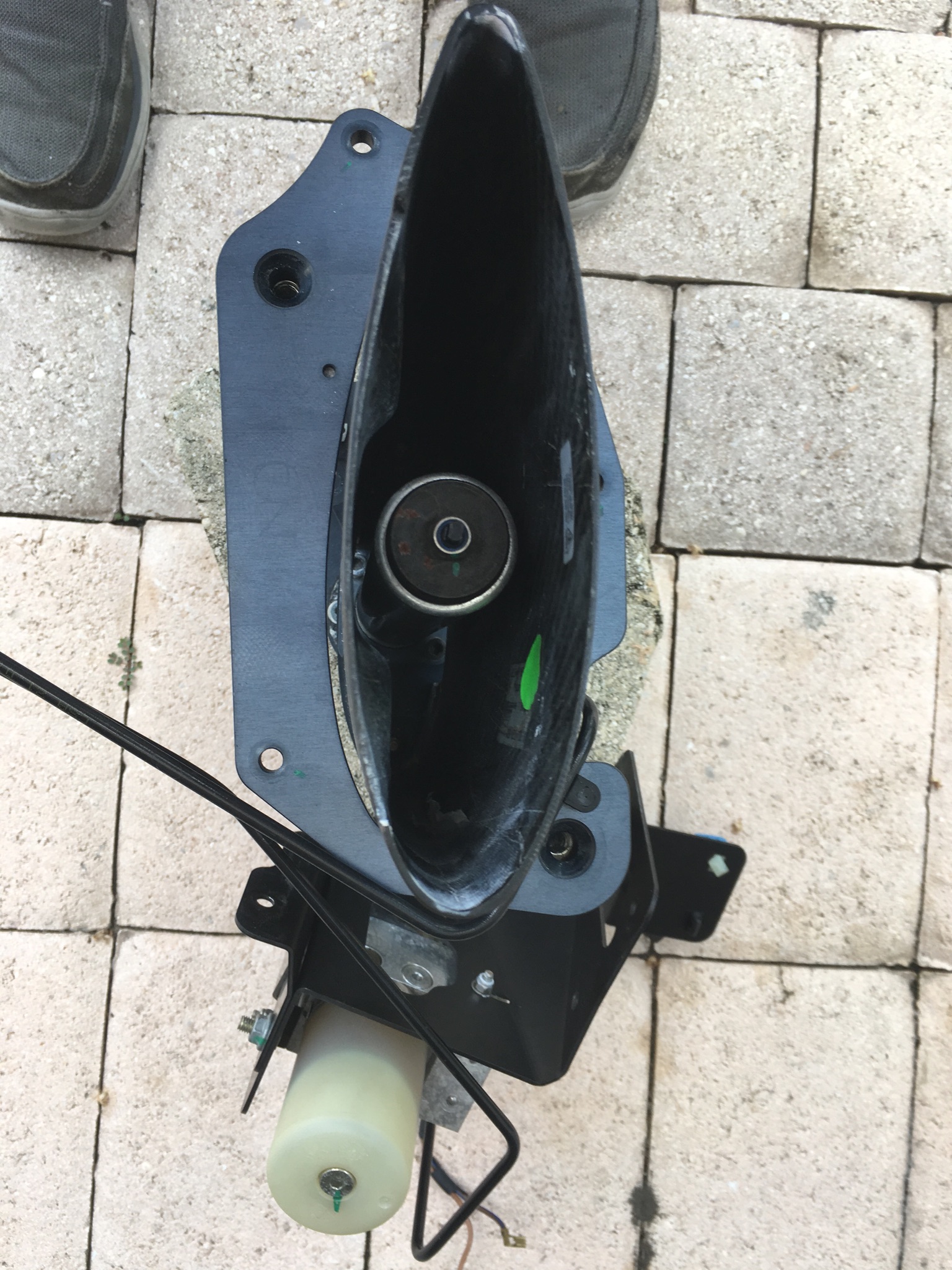 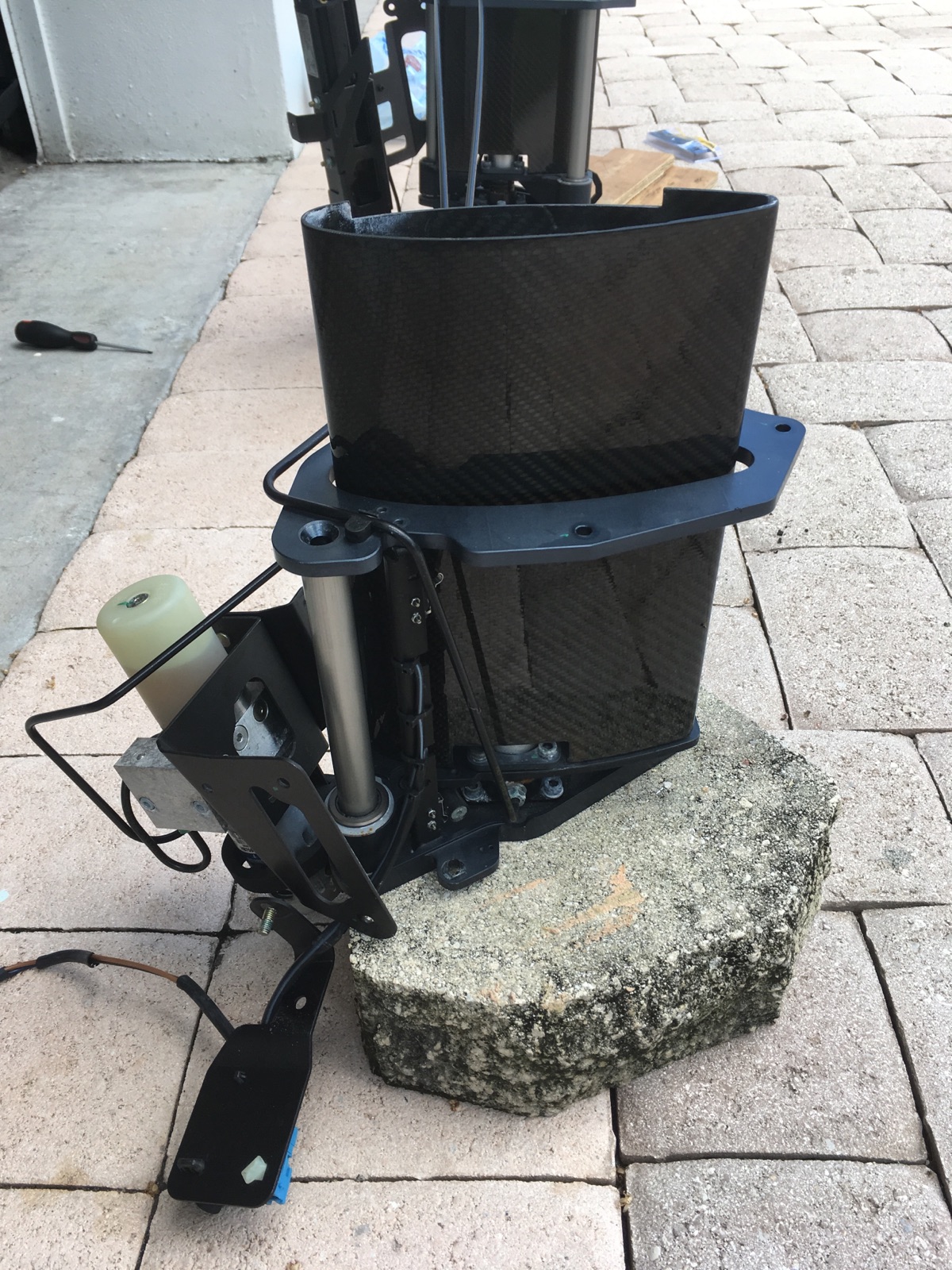 All of this is replaced with our lighter, more robust and unique electric eRam Kit™ 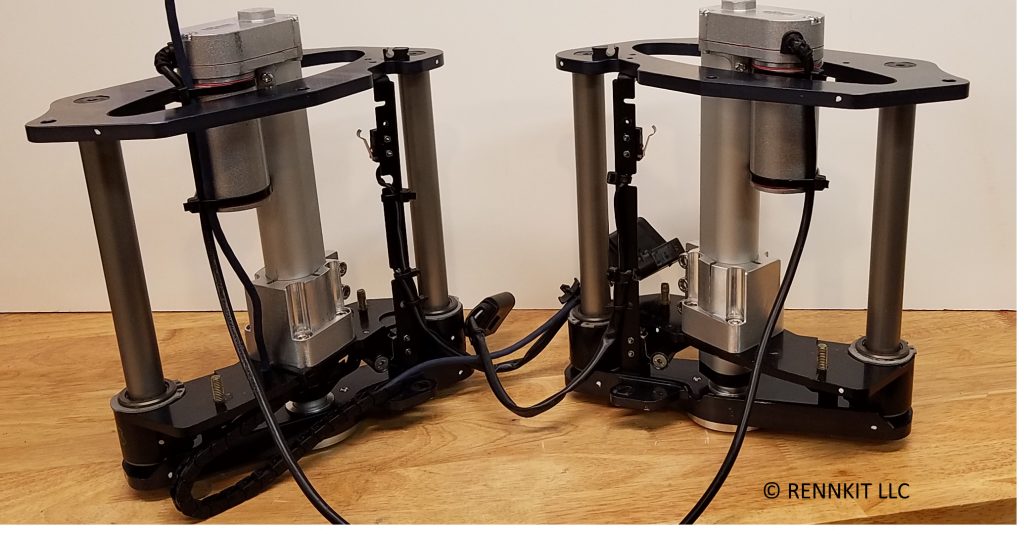 The Carrera GT eRam Kit™ consists of two self contained electric rams, fittings, fasteners and electrical connections.  The center sliding plates are slightly modified – but this does not prevent return to the hydraulic rams in the future.  Easily maintained – no special tools needed – eRam Kit™ parts are simple to replace.

HEAVY DUTY yet light weight, the eRam Kit™ has two built-in limit switches within each electric ram. Functions exactly like the factory system; extends by using the dash switch or by reaching the wing deployment speed. Retracts with the dash switch, or upon slowing to the wing retract speed. If any of 4 factory limit switches fails (as they do) – the electric ram contains a back up switch!

COST EFFECTIVE – our eRam Kit™ is far less expensive than a new factory set ($24,500) – and will NEVER leak or fail due to the multiple problems associated with the OEM hydraulic mechanism. We have carefully identified over 13 failure mechanisms, which can be reviewed HERE. Installation of the eRam Kit™ is straight forward. No electrical modifications – plugs into existing electrical connections.

The patented eRam Kit™ is designed for fairly harsh environmental conditions.  If you used your car as a daily driver 5 days per week, and took 4 trips per day on a highway so the rams cycle 8 times, that would be 2,000 cycles per year, or on average 0.23 cycles per hr on average.

The eRam Kit™ has a very conservative 25% duty cycle.  Thus, you would be able to safely cycle the wing 300 times per hour.  In effect, there is a 1300:1 safety factor on an already conservative duty cycle.

Rennkit™ has been providing the eRam Kit™ for over 5 years to the delight of Porsche® owners around the world. The eRam Kit™ performs as designed at many high speed track trials (over 200 MPH in a modified 997 Turbo)! Many eRam Kit™ installation are on Turbos that are tracked. Wing operation is stable with smooth and precise actuation. Street or track, operation is exactly the same.

The bore has to be minimally modified on one side of central hole.  This does NOT affect re-installation of the hydraulic rams in the future. Rennkit™ can modify the bore, or you can take to the sliding plates to your shop for modification using our CAD prints. We offer either solution!

We do recommend you hold on to the old hydraulic setup – put it in a waterproof plastic container – include it with the sale of your Carrera GT should you ever sell the car!  Rennkit can return your elevators to the hydraulic rams should that be a requirement of vehicle sale – AT NO CHARGE!  That is how confident we are with our patented eRam Kit™.