IF the wing is cocked,

OR fluid present on cylinders or deck lid,

OR wing does not go up or go down all the time,

THE FACTORY HYDRAULIC MECHANISM IS FAILING 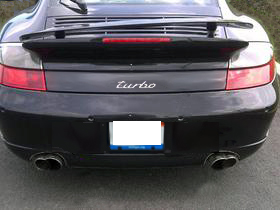 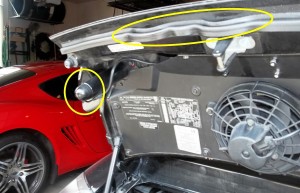 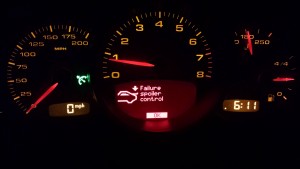 The hydraulic wing lift system can never be fixed permanently.  Vendors offer repair services and “upgraded parts” for the factory mechanism with claims of an easy fix when it fails again by replacing worn out o-rings.

Who wants to dismantle the wing mechanism every year or two to replace o-rings, then fill and bleed the mechanism???

We have cataloged 14 distinct causes for failure.  Fix one problem, the next will occur.  The factory wing mechanisms are getting older and are failing more often.

The water cooled Turbo’s rising rear wing is not a cosmetic part, it is a functional part.  For the first time, the Turbo lineup employed a 2-piece spoiler wing assembly built into the rear deck lid.  This is the same concept utilized in the Carrera GT supercar.  The upper wing is an inverted airfoil, or upside-down airplane wing.  The same principle that lifts an airplane up is used to push the back end of the Turbo down.

The 996 Turbo coupe’s inverted wing extends 2.4″ [60 mm] once the vehicle reaches 74 MPH [120 km/h].  As the cabriolet top creates additional air turbulence at the rear deck lid, the wing was extended even higher to 3.2″ [80 mm] in order to create the same down force as the coupe.  The wing retracts flush onto the deck lid spoiler once the vehicle slows to 37 MPH [60 km/h]. The 5th generation 996 Turbo has a minimal lift at the front axle with a cAF = 0.02 and very slight rear axle down-force of cAR = -0.01.  Down-force climbs as the car reaches top speed, down-force pressure on the rear axle builds up to 20 Lbf [90 N].  No longer was the tail of the turbo floating! 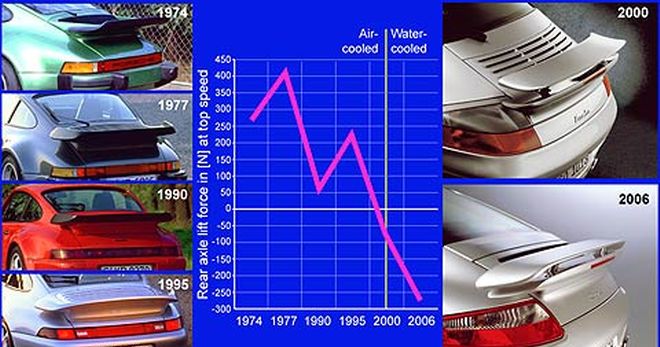 The inverted airfoil design by Porsche® is covered by patents for an extending wing and attachment method:

However, the “permanently sealed” hydraulic mechanism to raise and lower the wing was designed and supplied to Porsche® by an outside firm near Nuremberg, Germany starting in 1999. It is likely that Porsche® drafted a specification for the Turbo’s wing extension requirements – then searched for a nearby firm to provide the hardware.

The question is why did Porsche® choose such a complex, inherently faulty design – perhaps there was time pressure to get something working adequately enough, in order to launch the 5th generation water cooled Turbo for display in 1999.  This was the first time such an hydraulic mechanism was utilized by Porsche®.  The 964, 993, 996 and 997 Carrera retractable wings all utilize complex electro-mechanical actuation devices.  Only the Carrera GT, 996 Turbo and 997 Turbo have the hydraulic mechanism. 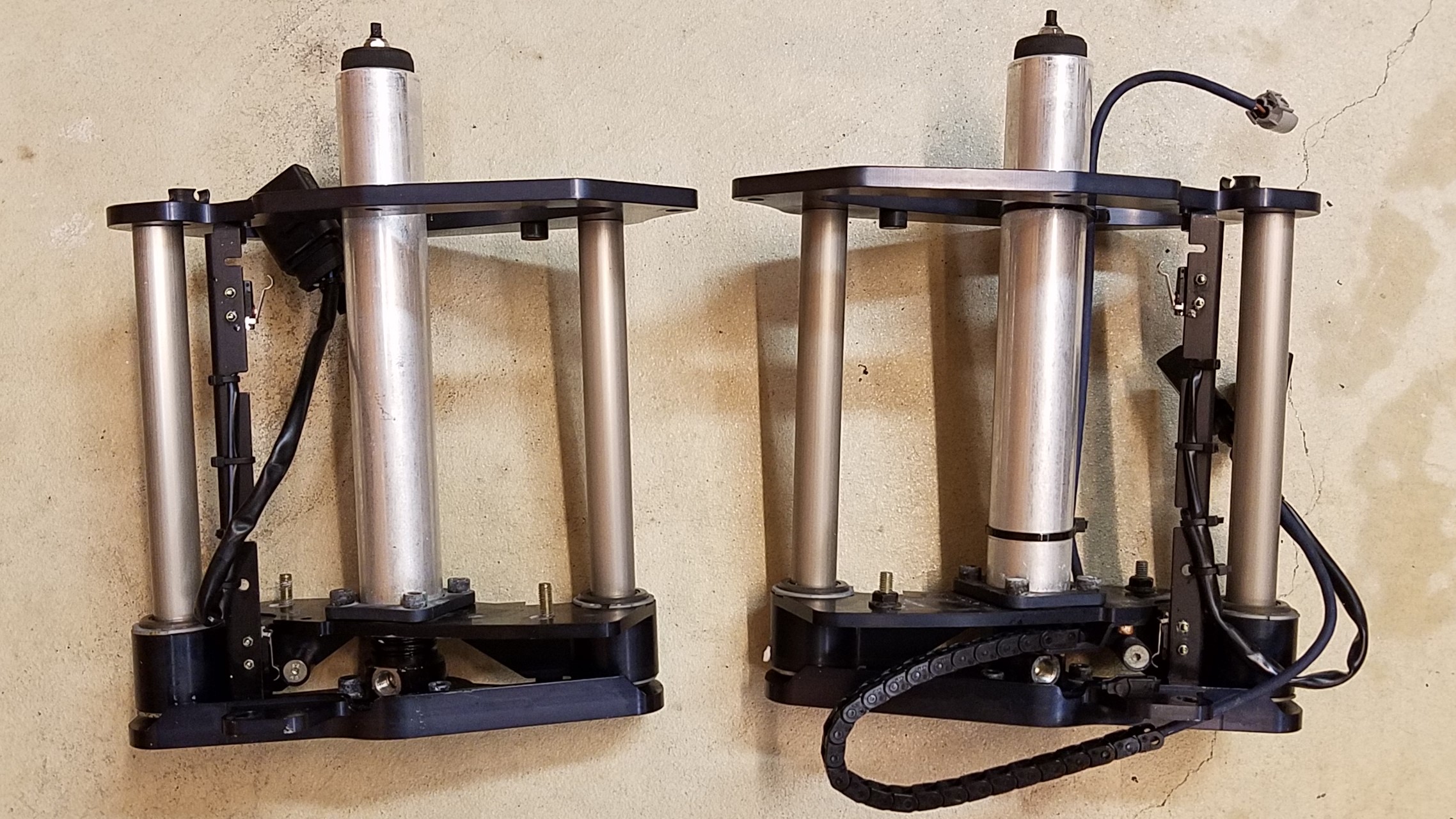 Carrera GT – OEM Factory Hydraulic Wing Lift Mechanism
Note that it has microswitches on BOTH sides!
(Shown before conversion to the all-electric eRam system)

How Does the Hydraulic Wing System Work?

All too often Turbo owners experience a broken or malfunctioning wing or leaks under the engine lid from the cylinders, fittings or motor driven plungers.

Operation:  The heart of the system consists of an electro-hydraulic drive device with 12v electric motor and jack screw along with two separately driven plungers or syringes. The electric motor spins a jack screw in one direction or the other, which pushes or pulls plungers via a threaded plastic block.  The closed system plungers force fluid through hoses into two spring loaded hydraulic cylinders connected to the wing.

Control:  Oddly, only the right side ram has a set of “extended” and “retracted” microswitches. The microswitches send a signal back to the instrument cluster ECU (computer controller) to turn off the 12V drive motor.  The ECU tracks the time it takes for the wing to deploy.  If it takes too long for a signal to occur – a SPOILER FAILURE warning alarm is displayed at the dash.  The SPOILER FAILURE warning is also activated if only the right side cylinder never fully extends or retracts. The left side wing cylinder is NOT monitored in the Turbo  (it is monitored in the Carrera GT). Upon failure, the only protection to keep the motor from burning up is a thermister overheat fuse near the motor commutator. Strangely, a discrete electrical failure protection (fuse) is missing, as a single fuse in the panel is for the entire back lid electrical; hydraulic system, light, e-latch, fan, etc. 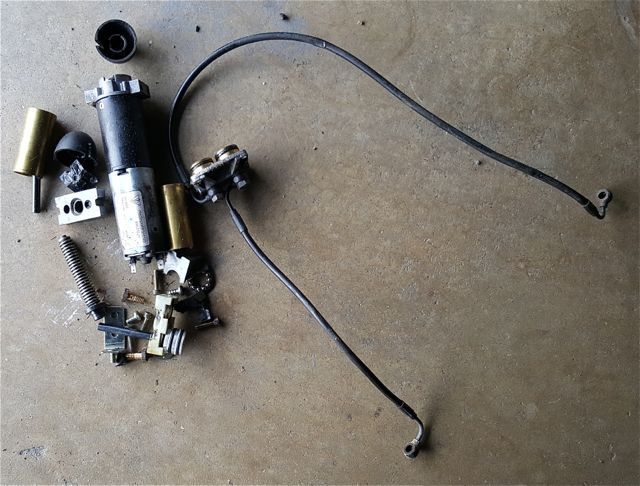 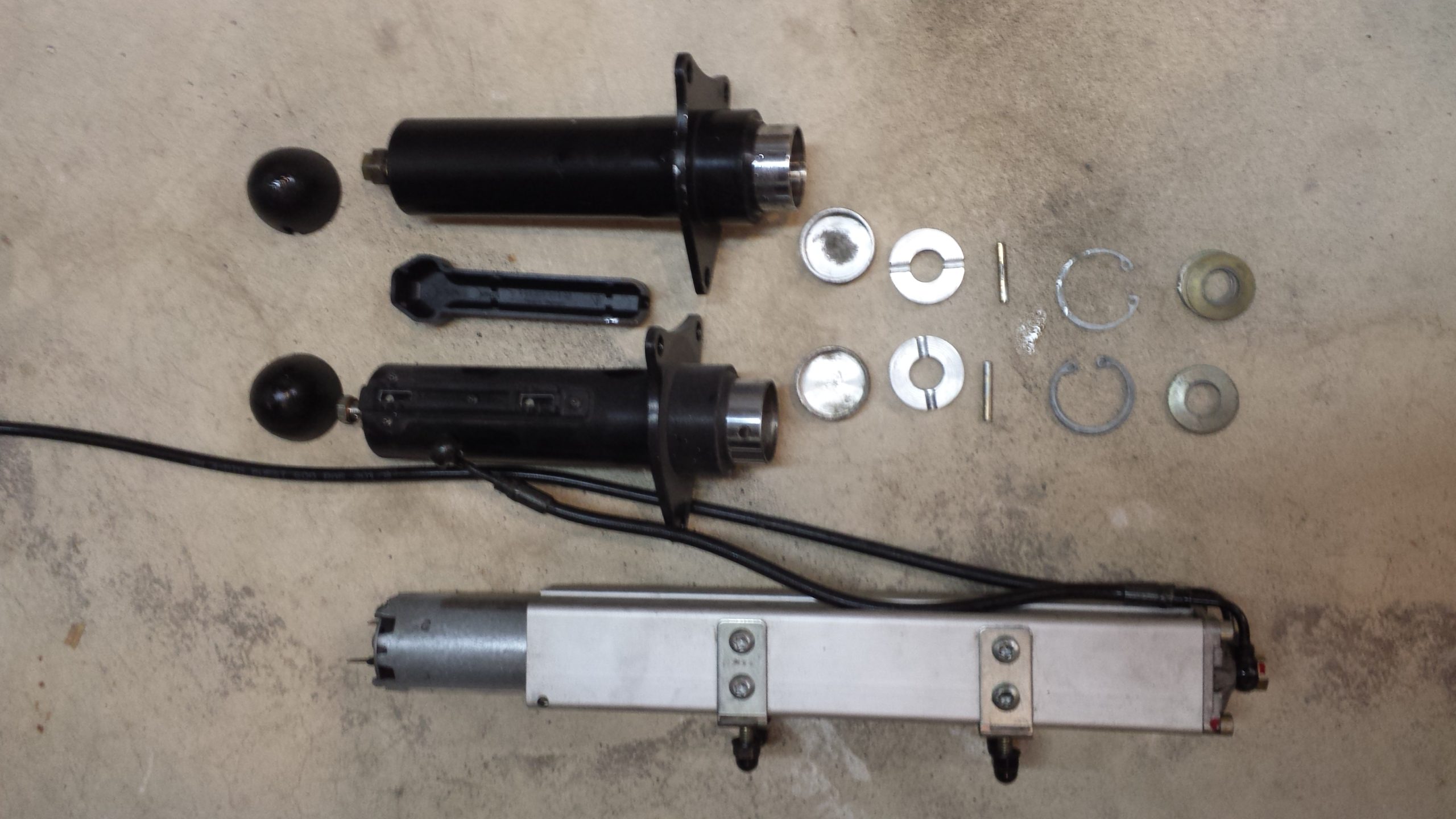 Many root cause failures have been identified by Rennkit and our many customers.  All are prevalent, given the age of these vehicles.  The entire mechanism sits directly over the hot engine. The entire hydraulic system gets very hot when the car is shut down, accelerating deterioration of all components. Of course, part of the system is exposed to the elements with the wing up. We are finding a lot of dirt and moisture inside the chrome cylinder cavities.  It is not simply 1 chance of failure, but 3; as the left cylinder circuit, the right cylinder circuit or both cylinder circuits will fail. Often one side of the wing lowers while the other remains up!

1.  Plunger Block Failure:  Starting with the motorized plunger device, the black plastic plunger block is often broken due to wear, age, heat or malfunction of a limit switch with motor over-run: 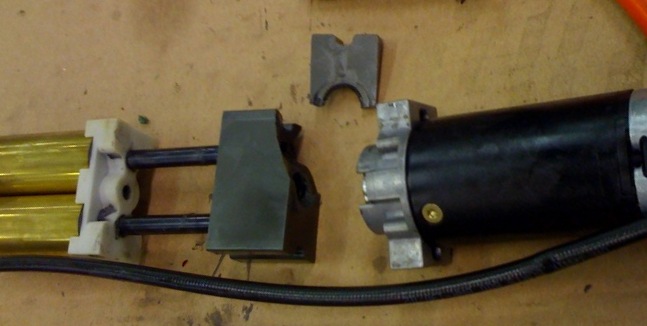 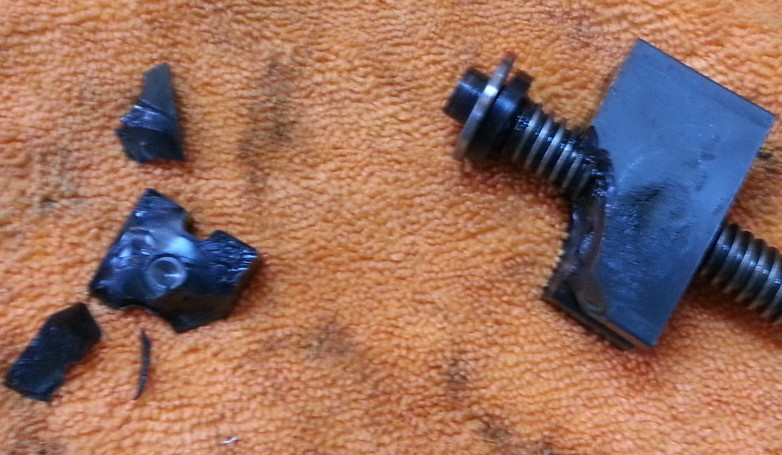 2.  Plunger Cylinder End Cap Failure:  The white plastic end piece for the plunger cylinders is often broken, usually due to wear, age, heat or malfunction of a limit switch with motor over-run: 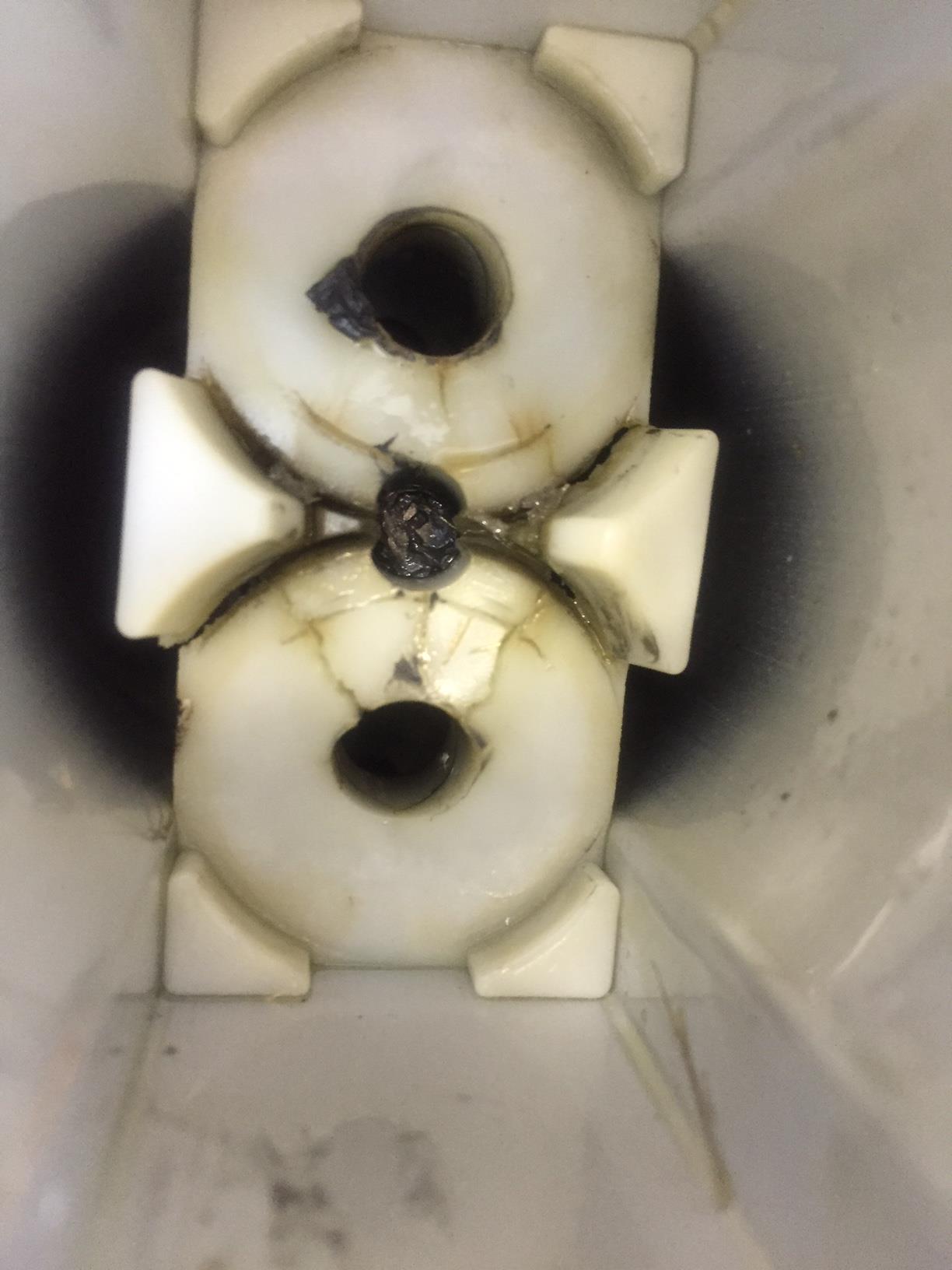 3.  Failed Seals:  There are several  seals and multiple o-rings in the plunger system itself – it has been found that the o-rings flat spot with age – causing leakage of the corrosive Pentosin PS fluid into the engine bay or down the back bumper (this happened to me): 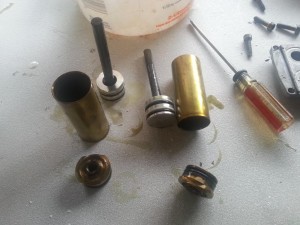 4.  Motor Failure:  The 12V motor can overheat and bind up or melt internal components due to dirt, heat, wear, age or limit switch failure (this happened to me): 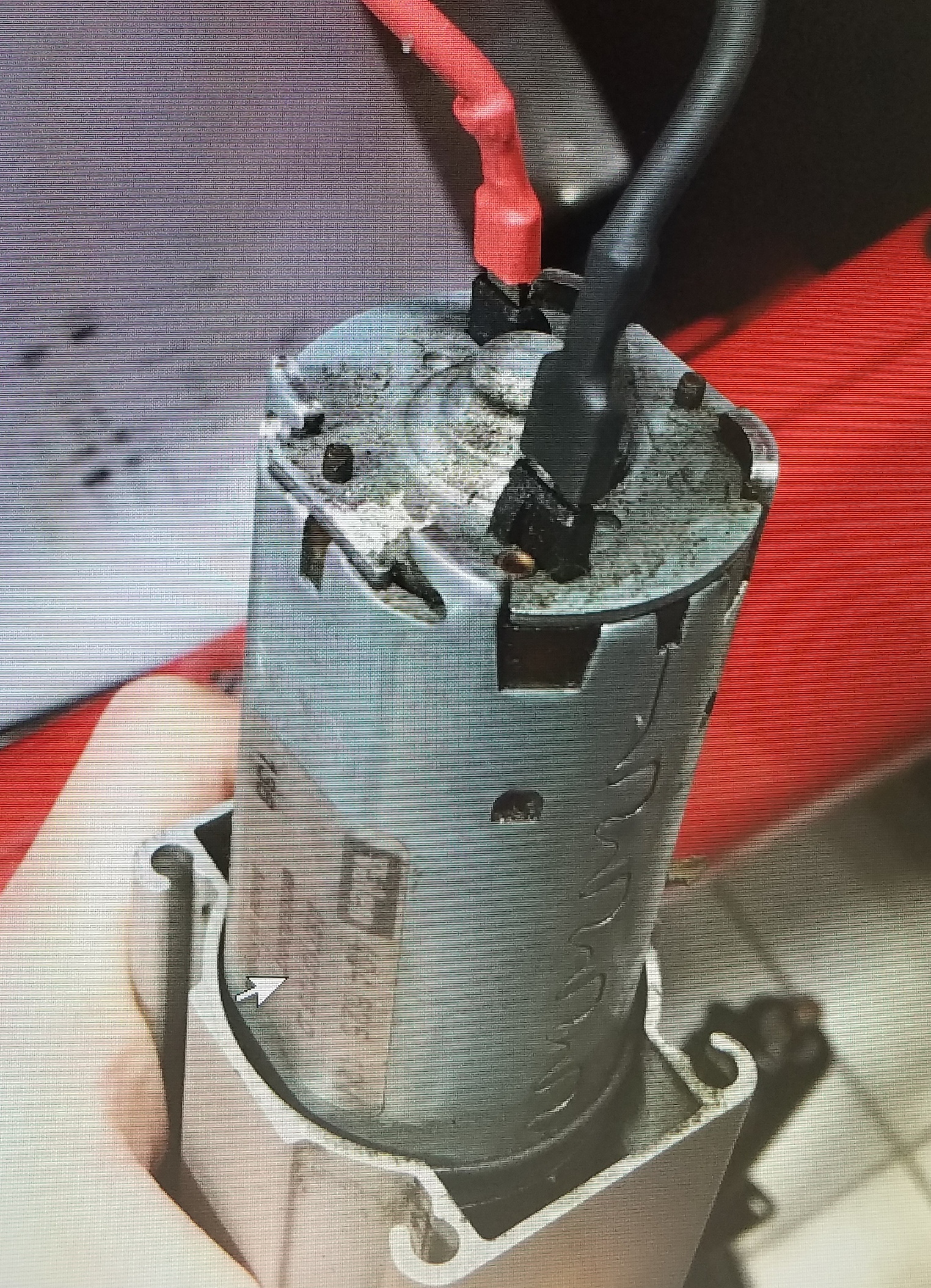 5.  Pressurized when Up:  Each hydraulic plunger has a high tension spring.  When the wing is up, the hydraulic system is under high pressure.  The tubing and banjo fittings are notorious for leaking – loosening up with heat cycling over time (this happened to me): 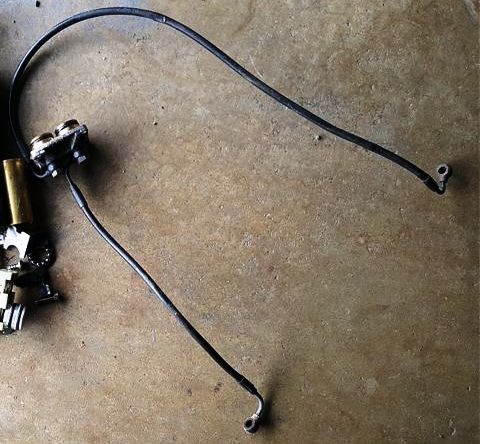 6.  Lip Seals:  Rubber lip seals on outer chrome tube are needed to keep the elements out of the inner hydraulic components.  They are very delicate, and can become brittle, crack and lose their pliability due to moisture, pollution, dirt, age, wear, sunlight, heat and other environmental factors. The seal is no longer maintained, allowing moisture and dirt into the inner cylinder area. The moisture attacks the brass plunger cylinder and steel spring, causing deterioration, rust and failure.  The chromed tubes may bind up. 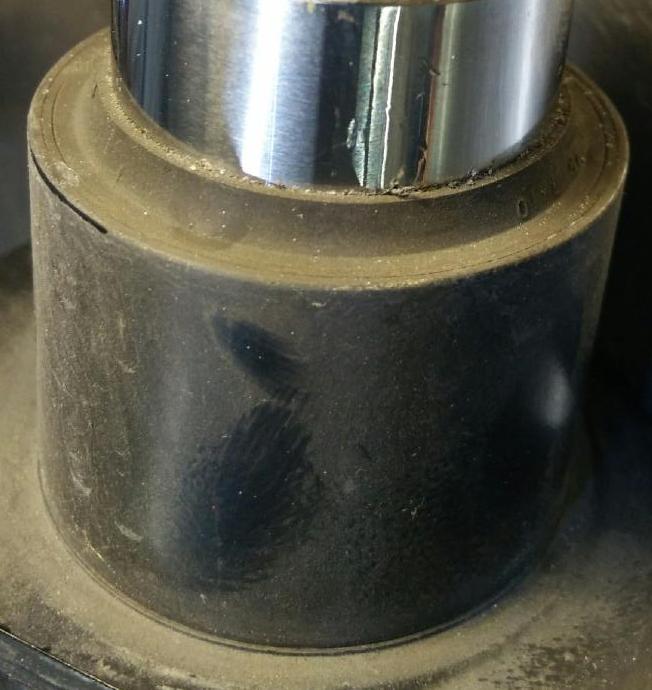 7.  Damaged Cylinders:  The outer chrome plated brass “beauty” cylinders are easily damaged during repairs or by other means. This allows dirt and moisture to enter the inner cavity with every stroke. The inner cavity is where the narrow brass hydraulic cylinder and spring reside. 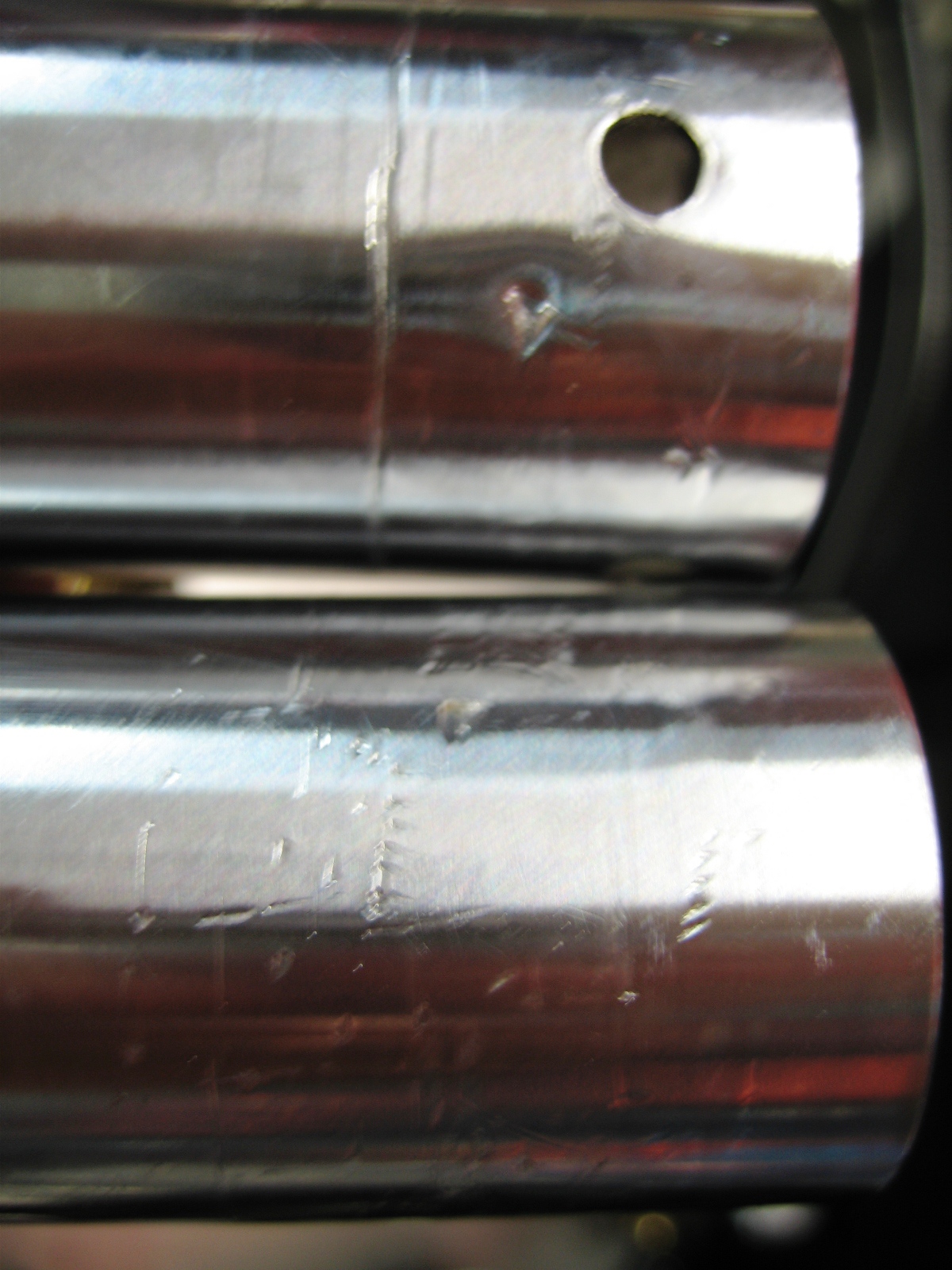 8.  One Side Lowers:  A high tension steel spring within each cylinder mechanism is designed to force the wing to lower, should there be a failure. But in reality – this may not be accomplished as only one side may fail. The actual piston and cylinder that raise and lower the wing are quite a bit SMALLER than the surrounding chromed outer cylinder, about the diameter of a pencil – cleverly hidden within the big fat outer cylinder.  Fatigue, moisture and dirt will eventually cause spring failure.

9.  Broken Springs:  Whenever the wing is extended, these steel springs are compressed under great tension. This exacerbates failure and leakage at every joint and seal – since the entire hydraulic system (both rams, fittings, hoses and both motor plungers) experiences excessive hydraulic back pressure. The steel springs often break due to corrosion: 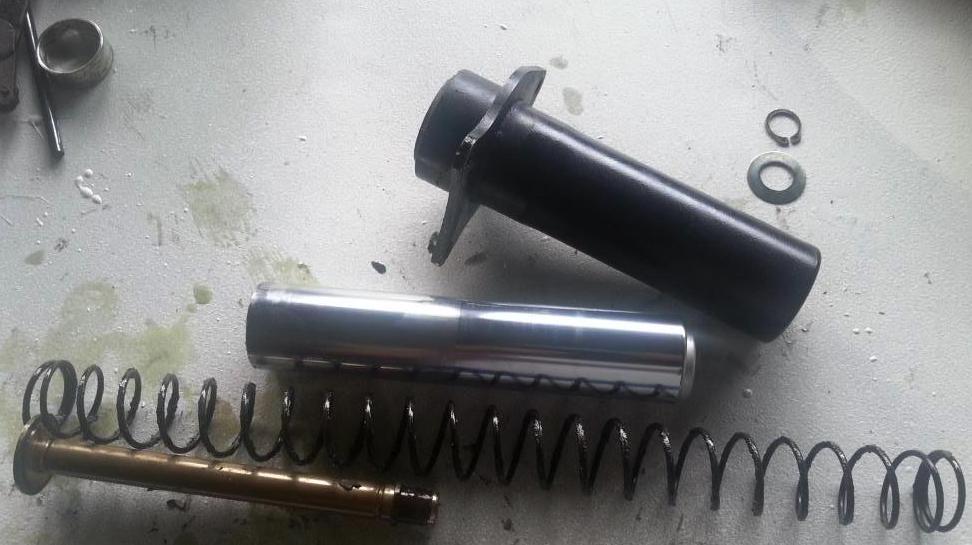 10.  Inner Cylinder Components:  Each hydraulic ram has a non-rebuildable factory sealed brass inner cylinder and piston. The inner o-ring seals often leak as they become flat spotted around the perimeter. Heat and age causes the o-rings to become brittle and lose compliance to the barrel.  As shown below, this inner cylinder was cut apart, new seals installed, with hardware store plumbing fittings installed, then soldered back together.  It is difficult not to bend or damage the soft brass tube – or to keep it round during cutting, heating and soldering.  Heat from soldering the assembly back together can damage new elastomeric o-rings and support seals. Often rebuild services don’t bother cutting the plungers to renew the seals. Wonder how long this one with hardware store fittings will last?

11.  Separate Hydraulic Circuits:  Oddly, each hydraulic ram is actuated by a separate hydraulic circuit. If either circuit fails, the wing is crooked and inoperable. This is indicated by a cocked wing, warped engine lid seal or a wet cap on one of the hydraulic rams.

12.  Microswitches:  There is a set of two miniature microswitches on the passenger side cylinder housing. They have very intricate and delicate inner workings that easily malfunction. These delicate little microswitches control operation and direction of the hydraulic motor and spoiler failure warning function. There is no fail safe, over-ride or pop-off valve for the hydraulic circuit. Over pressure it and something will fail.  The microswitch is the only signal to the ECU for switching off the plunger motor. They easily fail, and this in turn causes breakage, over pressurization, leaks or other problems. Oddly, the microswitches are only on ONE ram – begging the question, what prevents motor operation if the other circuit leaks and fails? The fail safe system was not well thought out.  These delicate little switches coupled with hydraulic fluid loss are a major reason for the dreaded SPOILER FAILURE warning: 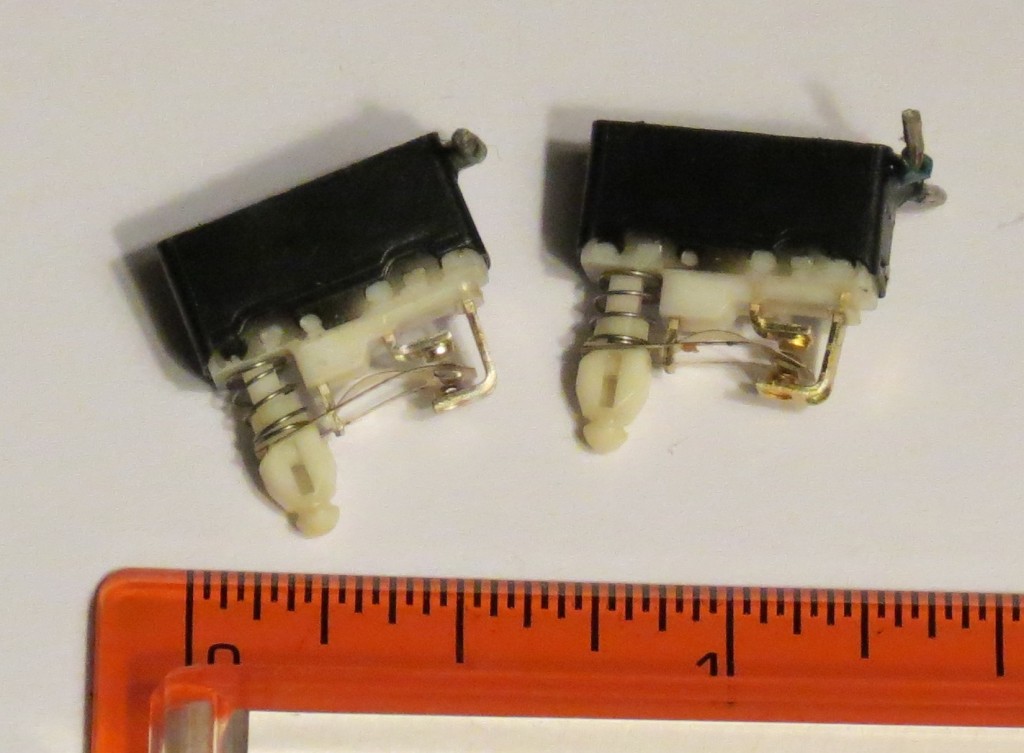 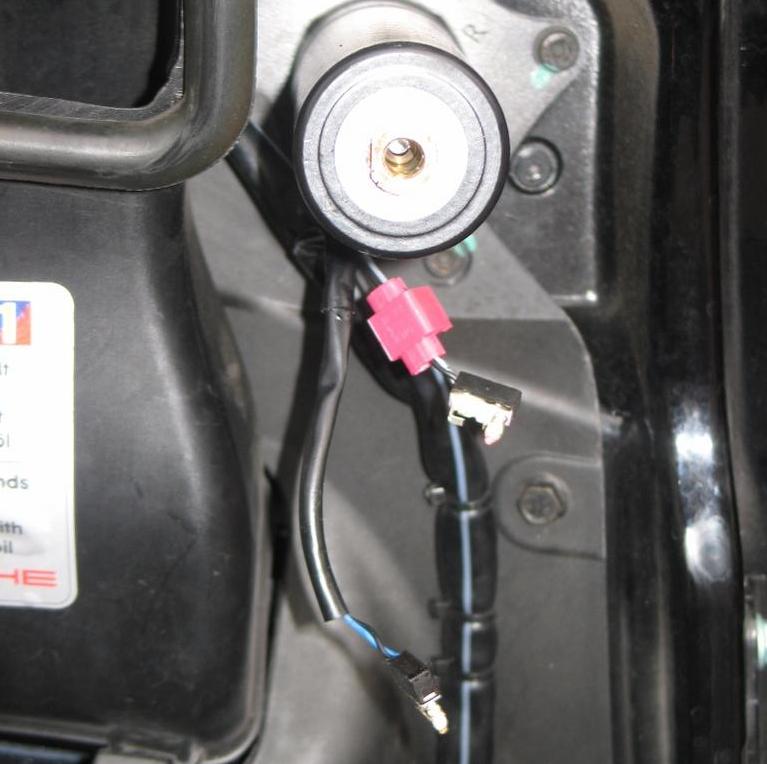 13. Heat:  The hydraulic system sits directly above the engine in the hottest part of the car, which promotes accelerated aging and breakdown of all components. We are hearing that cars in hotter climates, once having failed, continue to fail regularly because of excessive heat. Test labs use the Arrhenius method for testing materials or systems to failure under high heat.  Why?  Because mechanical and electrical devices fail faster at higher temperatures!  In effect, our 996 and 997 Turbos are conducting a high temperature experiment on the hydraulic system every time the car is driven!

14.  Hydraulic Fluid Contamination:  The primary contamination factor is from humidity.  It may not be obvious, but water contamination from moisture in the air is picked up on the internal extended ram cavity and introduced into the Pentosin PS fluid through the seals.  Water decomposes organic hydraulic fluids as well as seals and corrodes internal metal components.  Water molecules can diffuse through hydraulic hoses and age seals.  Contamination also comes from internal moving parts that wear.  Microscopic metal particles wear the seals and adjacent metal surfaces.  Being a closed system, (no dipstick, no reservoir, no drain plug) the fluid was never intended to be changed.

Don’t allow a failure to happen!  An eRam Kit™ is easily the best value for UPGRADING the functional wing operation:

New factory replacement hydraulic system is US$ 2200 – $2400!  Replacement by the dealer is US$ 3000 or more (reports of US$ 4900 for the 997 Turbo!).  The factory mechanism can be rebuilt or replaced, but the root cause problems will NEVER go away. THERE ARE FAR TOO MANY THINGS THAT CAN FAIL. Even “rebuilding” the hydraulics can NEVER fix the design flaws and potential problems, or even add another set of microswitches like on the Carrera GT!

Why risk corrosive Pentosin PS fluid leaks into your engine compartment or down the back bumper?