Scroll down to find the following: 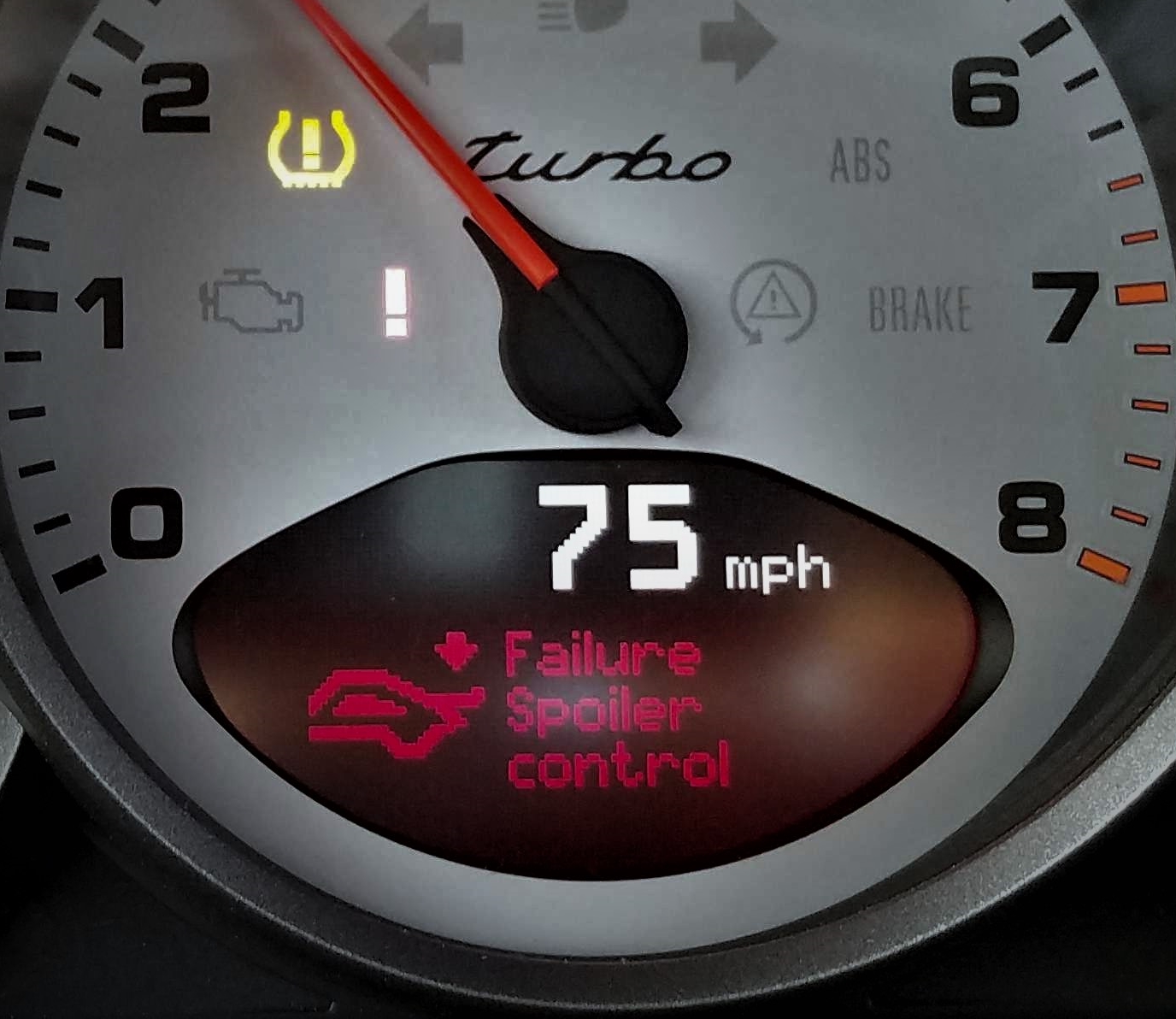 Don’t risk Power Steering fluid leaks into your engine bay or down the bumper. Extensively designed and engineered to permanently fix the overly complex and troublesome factory hydraulic mechanism.  Since 2015, our eRam Kit™ is the best permanent economical solution for a fully functional wing!  WORKS EXACTLY LIKE THE FACTORY MECHANISM.  Up at 75 MPH, down at 37 MPH or with the switch. 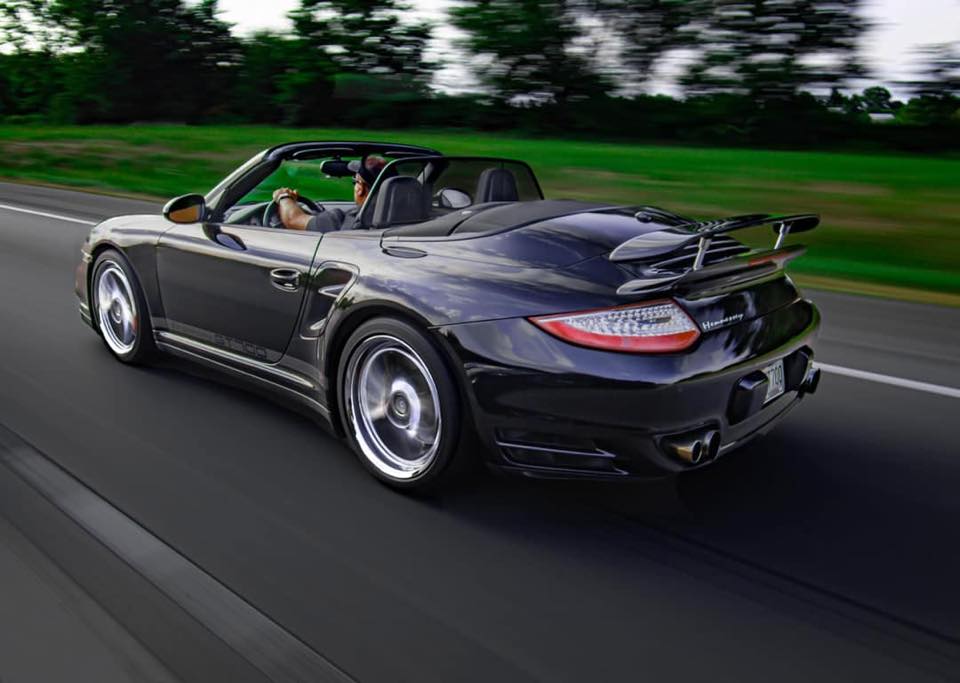 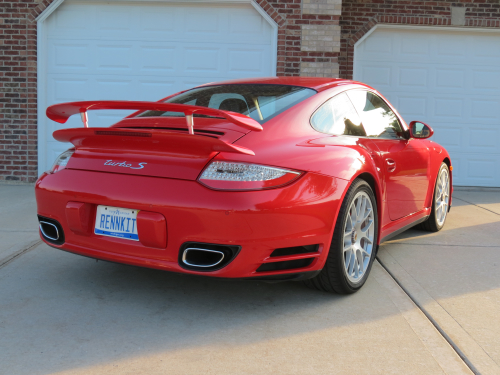 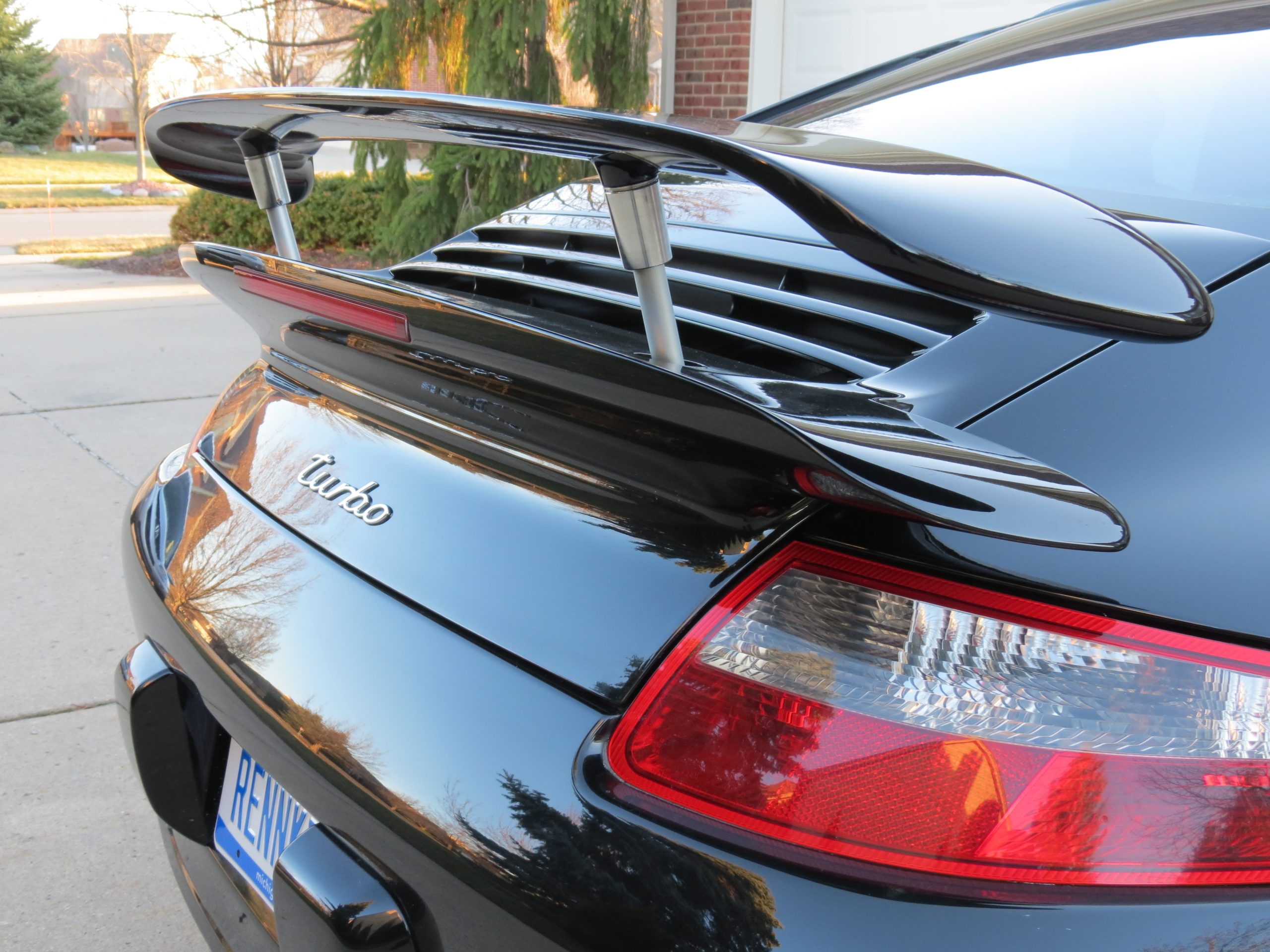 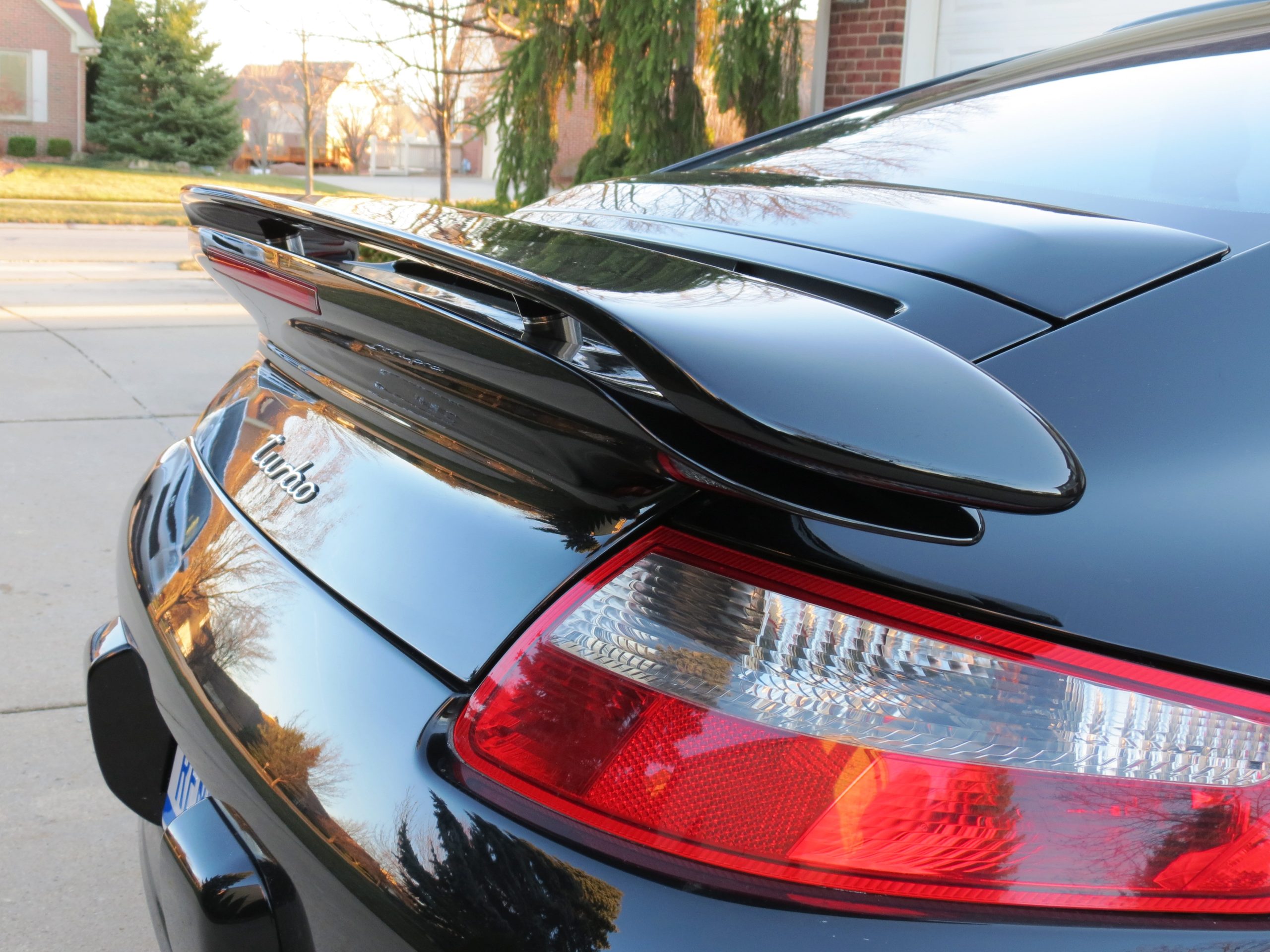 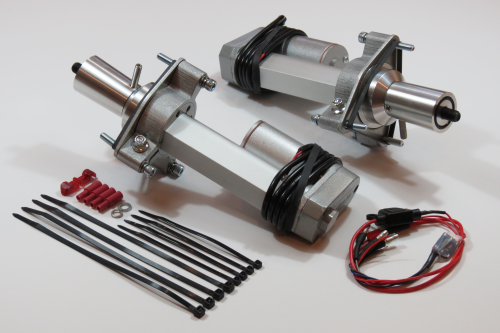 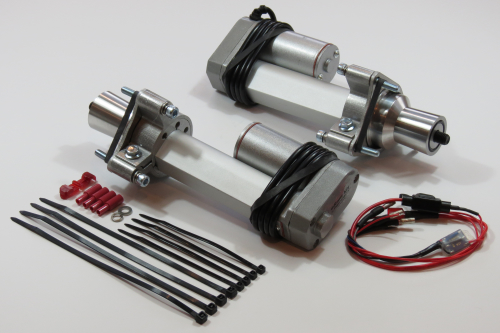 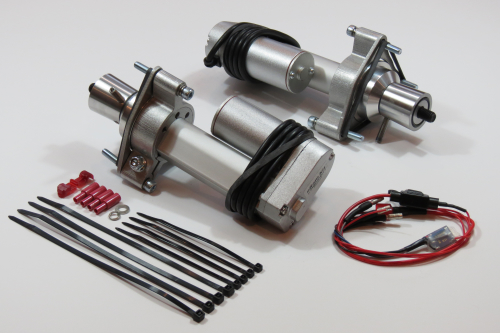 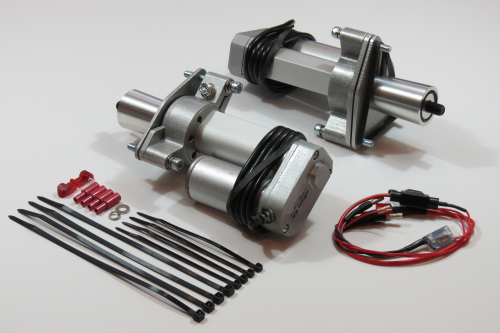 Recommended for Coupe Only.

Our patented 997 Turbo eRam Kit™ consists of two pre-assembled self-contained electric rams that simply bolt onto the engine lid with absolutely NO modifications. The eRam Kit™ includes a small electronic “MicroModule Device™” that connects to the factory wiring and prevents the dreaded SPOILER WARNING. Nearly plug and play!

Functions exactly like the factory mechanism; wing extends by using the dash switch or after reaching 75 MPH (100 Km/h). Wing retracts with the dash switch, or upon slowing to 37 MPH (60 Km/h).

Stop spending time, effort and money on the troublesome factory system. Fix one item and there are several more parts that have degraded and will soon fail.  Don’t risk a hydraulic wing system failure and subsequent leak of corrosive (and flammable) Power Steering fluid into your hot engine bay or down the back bumper. The original factory hydraulic mechanism can be rebuilt, but can NEVER be prevented from failing or leaking fluid. Our patented robust all-electric eRam Kit™ can never leak and eRam Kit™ parts are easily removed with standard hand tools for servicing or upgrade.

The dealer charges up to $4000 to replace the troublesome hydraulic mechanism. Others offer a rebuild service, simply tearing down and repairing the same failure prone mechanism, often using solvents to swell internal o-rings.  Another offers shiny aftermarket parts for the internal hydraulic mechanism made out of stainless instead of brass.  They don’t even attempt to call it a permanent solution, claiming it is “easy” to change out cheap internal o-rings, then refill and bleed the mechanism once it fails again… Who wants to go through that – let alone more than once? It’s only a matter of time until hot engine bay conditions destroy one of many hydraulic components that are failure prone!  14 WAYS THE HYDRAULICS FAIL

The patented eRam Kit™ comes with two self-contained electric eRams, all fittings, fasteners, electrical connections and the tiny MicroModule Device™ which prevents the spoiler warning.  No cutting, drilling or modification to any part of the car.  Easy install – about the same skill level as changing brake pads.  Installation of the eRam Kit™ takes about 2 hours for anyone with any mechanical skill. Most customers install the eRam Kit™ themselves using our  illustrated instruction guide and video (links sent with purchase).  Easily maintained – no special tools needed.  Easily modified – for example to later exchange for different length rams or to add Dust & Moisture Boots.

HEAVY DUTY yet light-weight aluminum electric eRams have built-in limit switches on each eRam.  Greatly reduced risk of failure along with the car’s  relays.

COST EFFECTIVE – Our patented eRam Kit™ is much less costly than a new factory mechanism (up to $4000 installed by the dealer) – and can NEVER leak or fail due to the many problems associated with the OEM hydraulic mechanism, outlined CLICK HERE.

Each eRam Kit™  comes fully pre-assembled, all hardware and electrical components included – simply bolt onto the 997 Turbo deck lid and wire up.  Choose from 4 extension heights and various options / accessories to transform and upgrade your 997 Turbo. 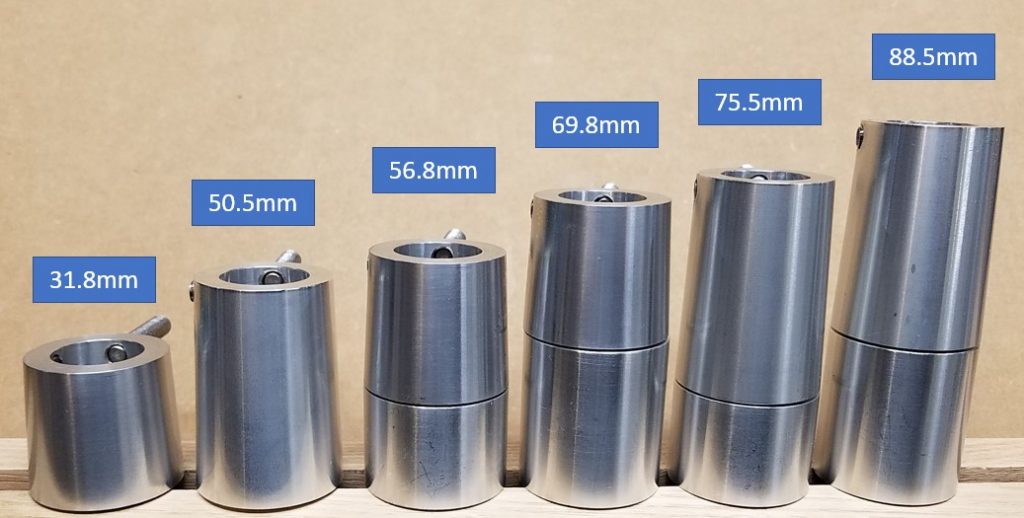 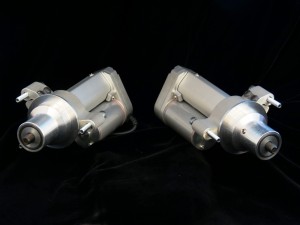 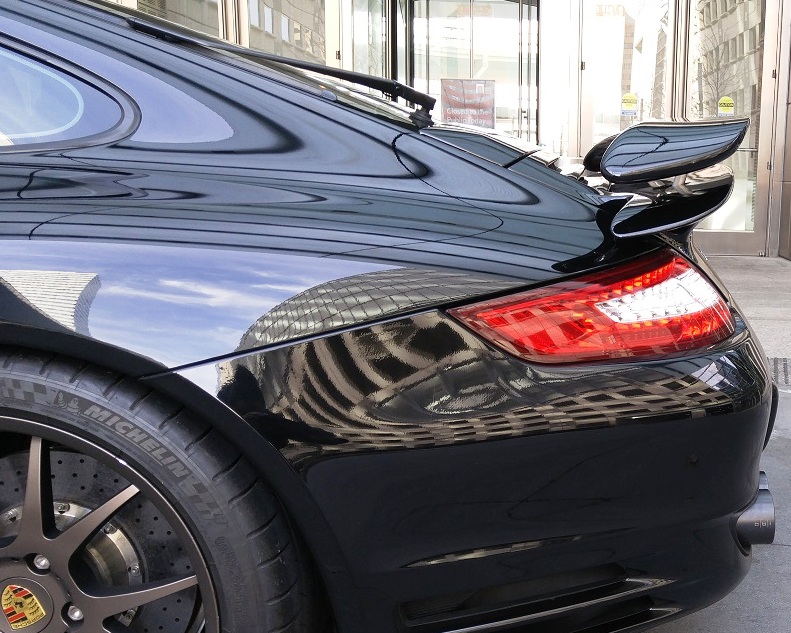 Wing operation with the eRam Kit™ installed is identical to the factory system; either by using the dash switch or when driving. Automatically deploys the wing up after reaching 75 MPH (120 km/h) and back down once at 37 MPH (60 km/h).  The motor driven rams are designed for harsh environments and are protected from external moisture with a dual-seal design. Adding the recommended Dust & Moisture Boots  further protects the eRam motor and gearbox from dust, moisture and harsh engine bay conditions.

The Porsche® 997 Turbo owner’s manual states that the Turbo should not be driven without proper wing operation – the car’s aerodynamics were designed around an operational wing: 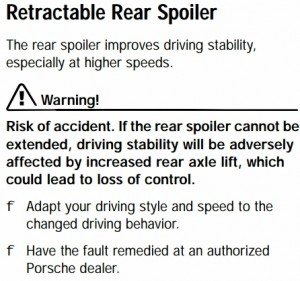 The eRam Kit™ is designed for fairly harsh environmental conditions.  If you used your car as a daily driver 5 days per week, and took 4 trips per day on a highway to cycle the rams 8 times, that equates to 2,000 cycles per year, or on average 0.23 cycles per hr on average.

The eRam Kit™ has a very conservative 25% duty cycle.  Thus, you would be able to safely cycle your wing 300 times per hour.  In effect, there is a 1300:1 safety factor on an already conservative duty cycle.

The eRam Kit™ has performed as designed during several high speed track trials over 200 MPH!  Many eRam Kit™ sets have been purchased by owners that track their Turbo.  They prefer the tallest and fastest eRam Kit™, as they want the factory look when down, with the benefit of better rear end down-force at the track.  Wing operation is stable with smooth and precise actuation. Quicker lap times were achieved with the 4″ eRam Kit™ installed. Street or track, operation is exactly the same.
Our 997.2 Turbo with 4.75″ eRam Kit at Road America: 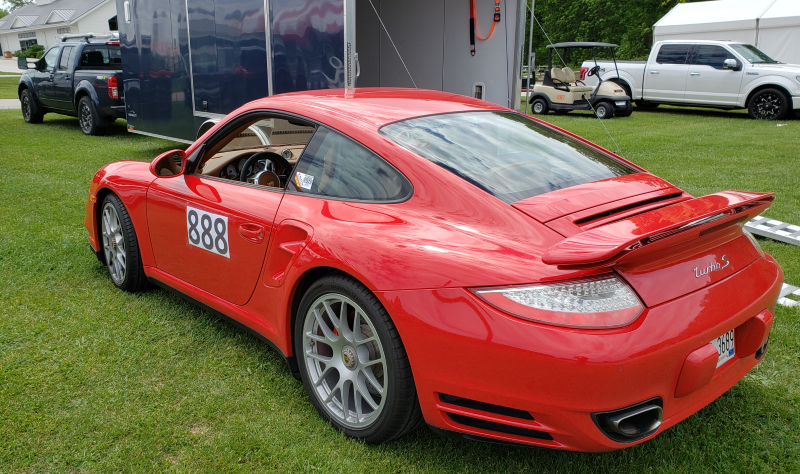 For Turbos with a fixed wing (e.g. GT3), aftermarket back lid and integral wing or for a malfunctioning OEM hydaulic mechanism that still works.

CAN ALSO BE USED WITH OUR 997 Turbo eRam Kit™ 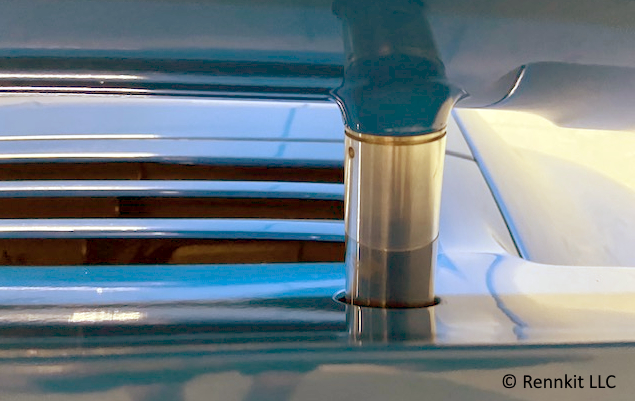 Extend your OEM hydraulic mechanism’s wing higher by 1″ or 2″.  Another way to get your wing further up in the clean air for better downforce!  In fact, the cabriolet wing raises up higher due to inherent turbulence from the cab top, up or down.

10 minute installation:  Simply use our Pin Wrench to remove the wing.  Screw the wing extenders onto the wing and tighten with the pin wrench, then screw the rams back onto the Wing Extenders with the pin wrench.  DIY simple.  Illustrated step by step instruction link provided.  Combine them to go even higher (2″ + 1″ = 3″, 2″ + 2″ = 4″, etc.).

Notes:
Wing will be 1″or 2″ higher than normal when down.
Pin Wrench recommended – factory used a very strong thread locker! 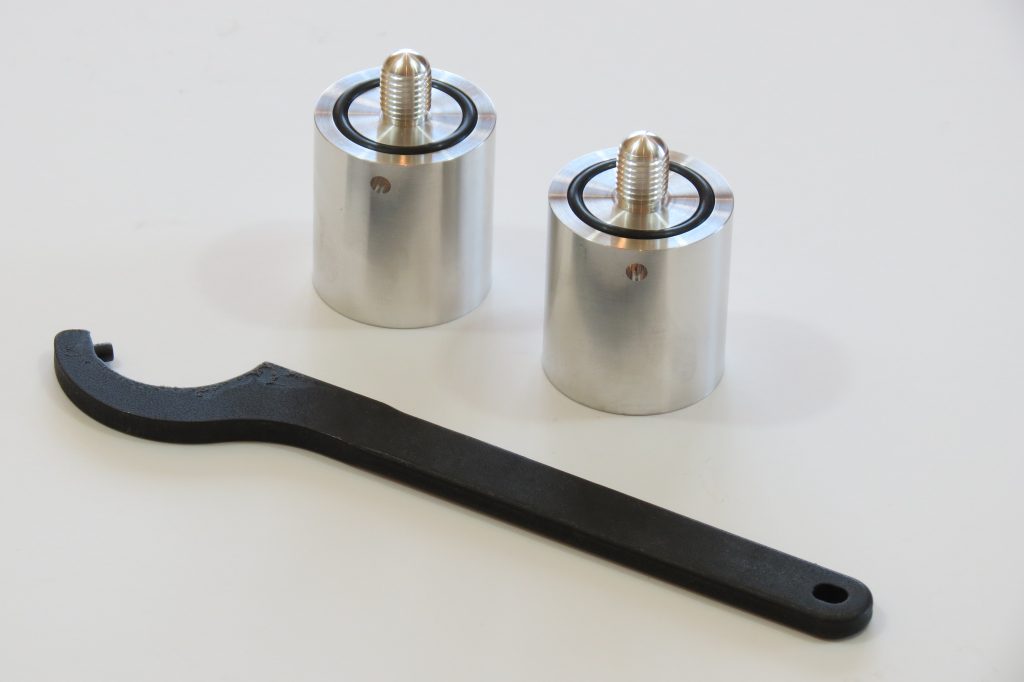 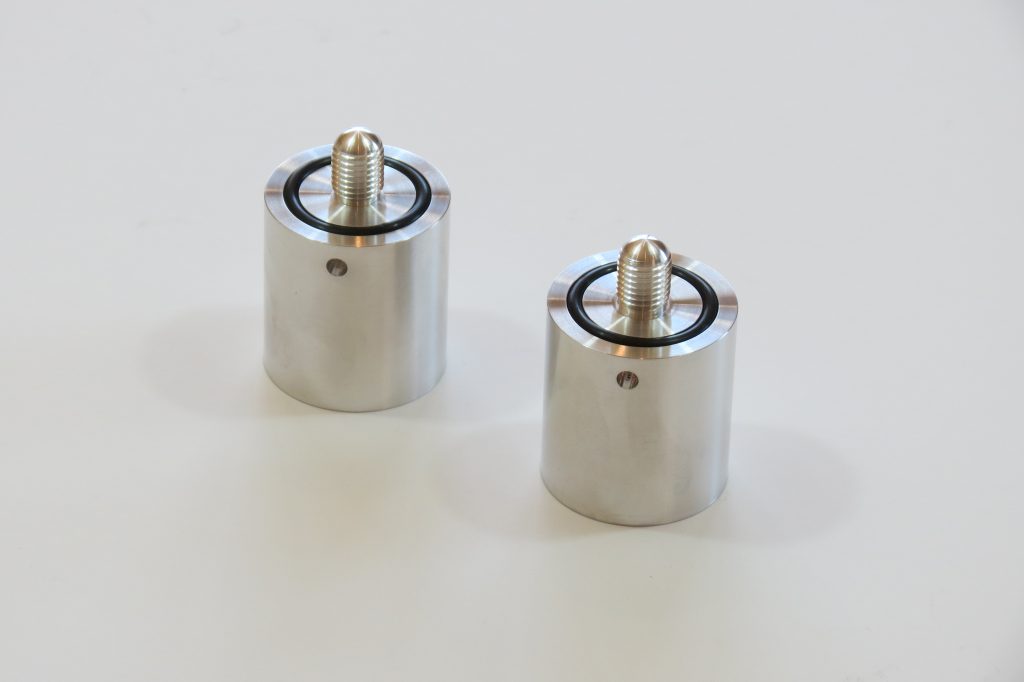 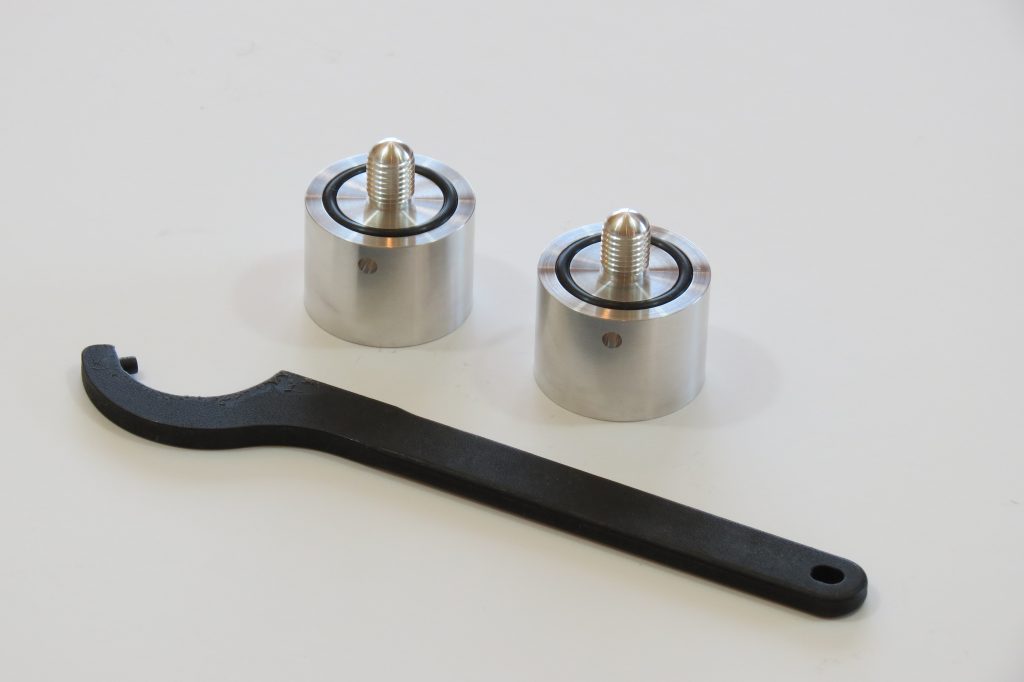 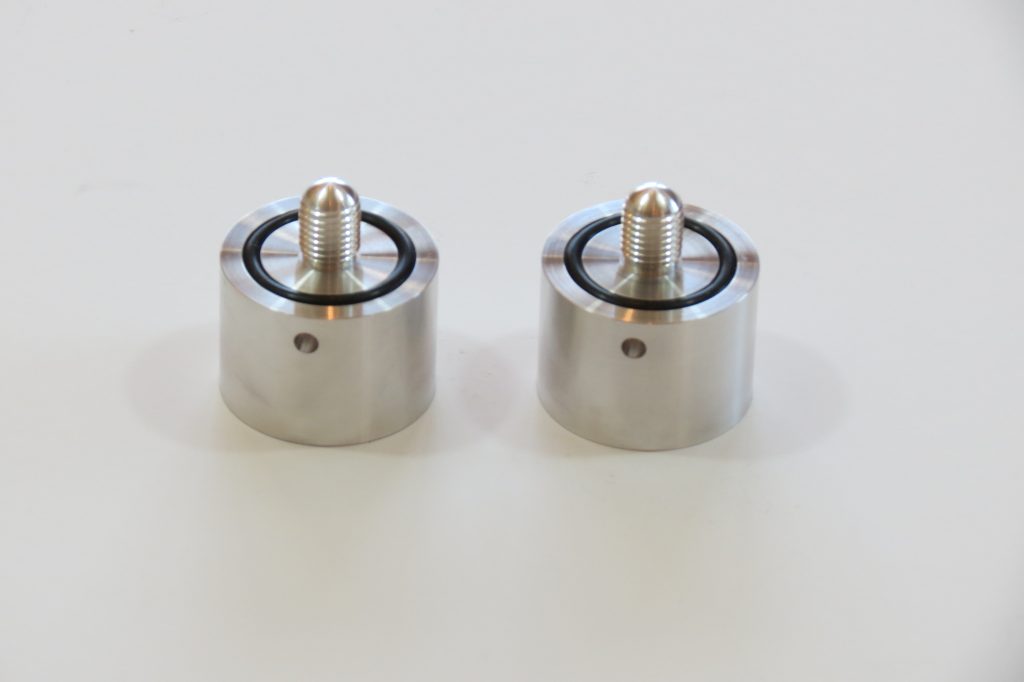 For all 997 series cars with Manual Transmission 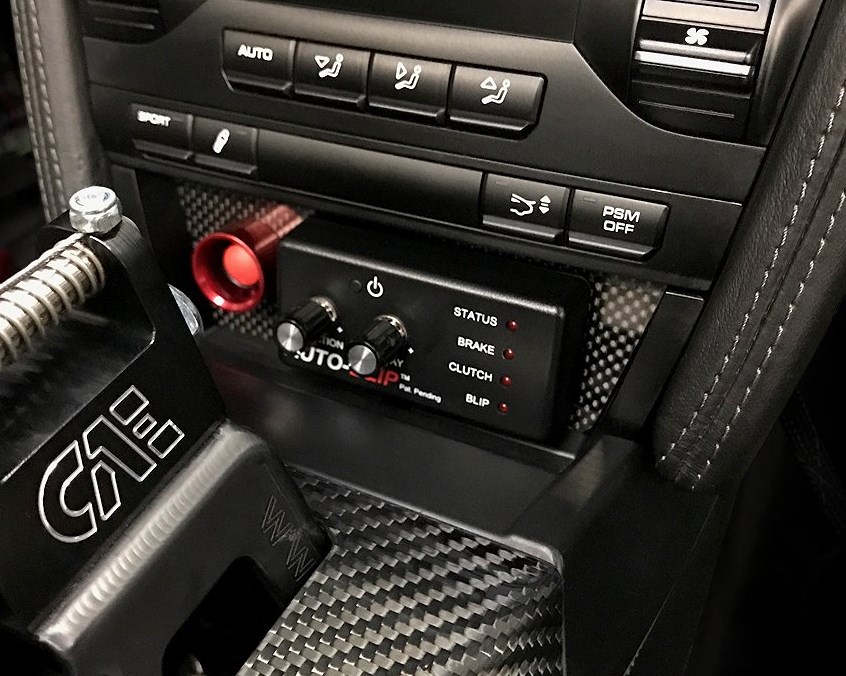 Here is our customer Brian at Leguna Seca – Downshift sounds awesome! “I’m so happy with this product and wish I would have gotten it sooner.” 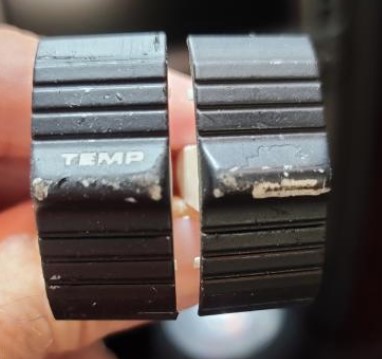 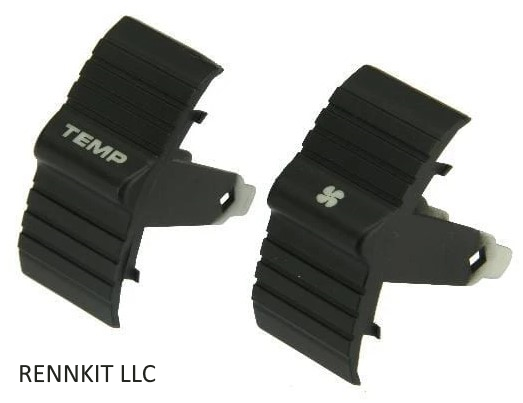 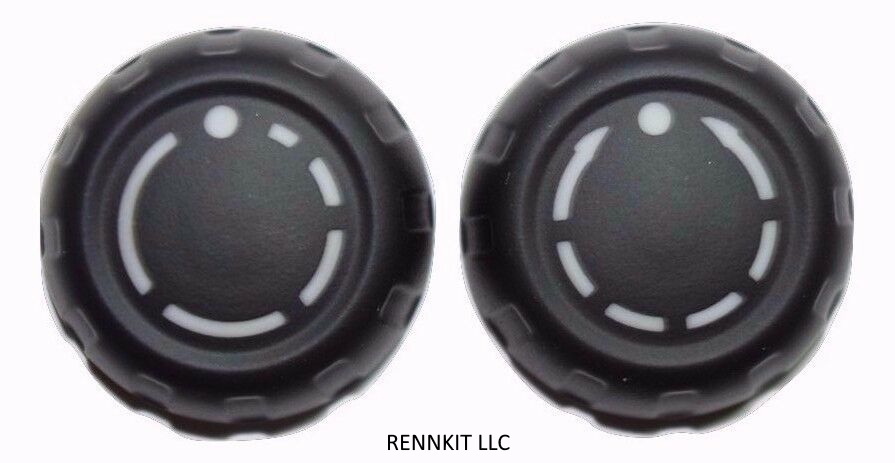 Choose between three hardness levels:
1. TRACK (80A) Orange – for optimized performance on track and race cars
2. HP STREET (70A) Yellow – for tuned and high performance street cars
3. SOFT (60A) Black – for added performance and to preserve the OEM bushing. 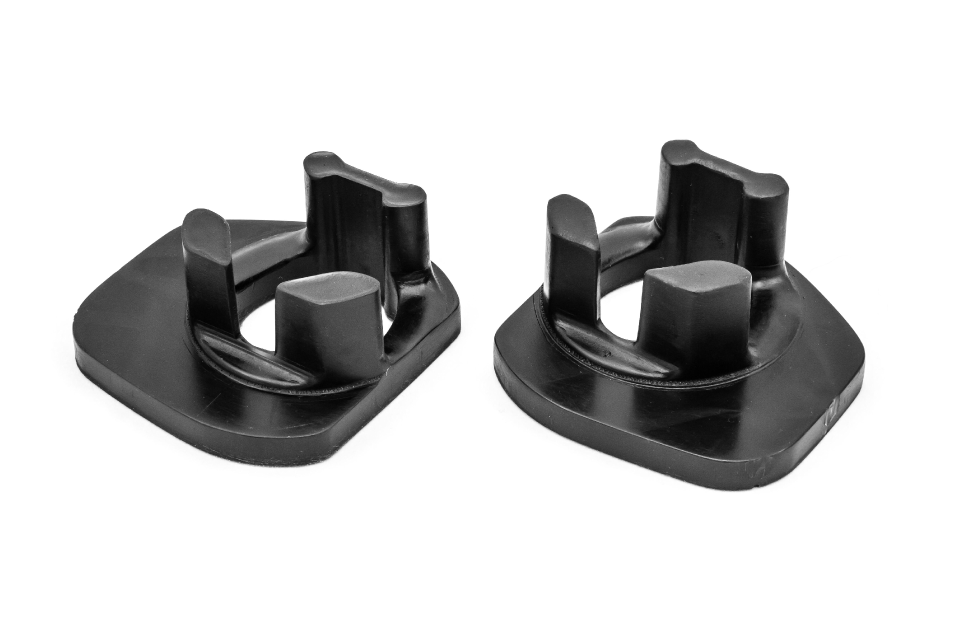 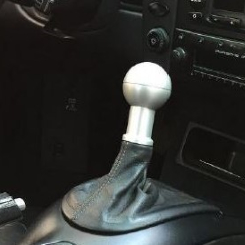 For race and track vehicles – Raises the shifter and eBrake up

about the full range of Zunsport grill products and pricing

for your car’s application and pricing

Shipment and warranty from Supplier

Rennkit™ has a growing network of PREFERRED SHOPS with the expertise to efficiently install the eRam Kit™:

If you are a Porsche® Specialist Repair Shop and would like to receive information about providing and installing the eRam Kit™ for your 996 / 997 Turbo and Carrera GT customers, let us know!

WARRANTY:  No worries, there is a 24 month limited warranty on all parts, and a money back guarantee for uninstalled eRam Kit™, or other Rennkit products (less nominal restocking fee) – click on PURCHASE and scroll down for details.  (Note; products not produced by Rennkit™ carry a warranty as provided by the suppler.  Contact Rennkit™ for further information.)

This site is in no way associated with Porsche Cars North America, Inc.
Porsche® is a registered trademark of Dr. Ing. h.c. F. Porsche AG.