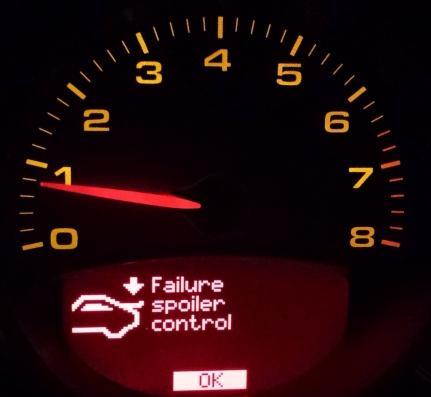 Why risk Pentosin® leaks into your engine bay or down the bumper.  This is the ONLY economical and permanent solution for a fully functional wing!

Your dealer wants over $3000 to install a replacement hydraulic mechanism. Our patented 996 Turbo electric eRam Kit™ consists of two pre-assembled electric rams that simply bolt onto the engine lid with absolutely NO modifications, and a tiny “MicroModule Device™” that connects to the factory wiring. Nearly plug and play! The kit includes all necessary hardware and  illustrated step by step instructions are sent with your order. Works exactly like the factory mechanism.  Upgrade from the troublesome factory hydraulic mechanism to the simpler, lighter, yet more robust eRam Kit™.  Available in 4 heights from 2″ to 4-3/4″. 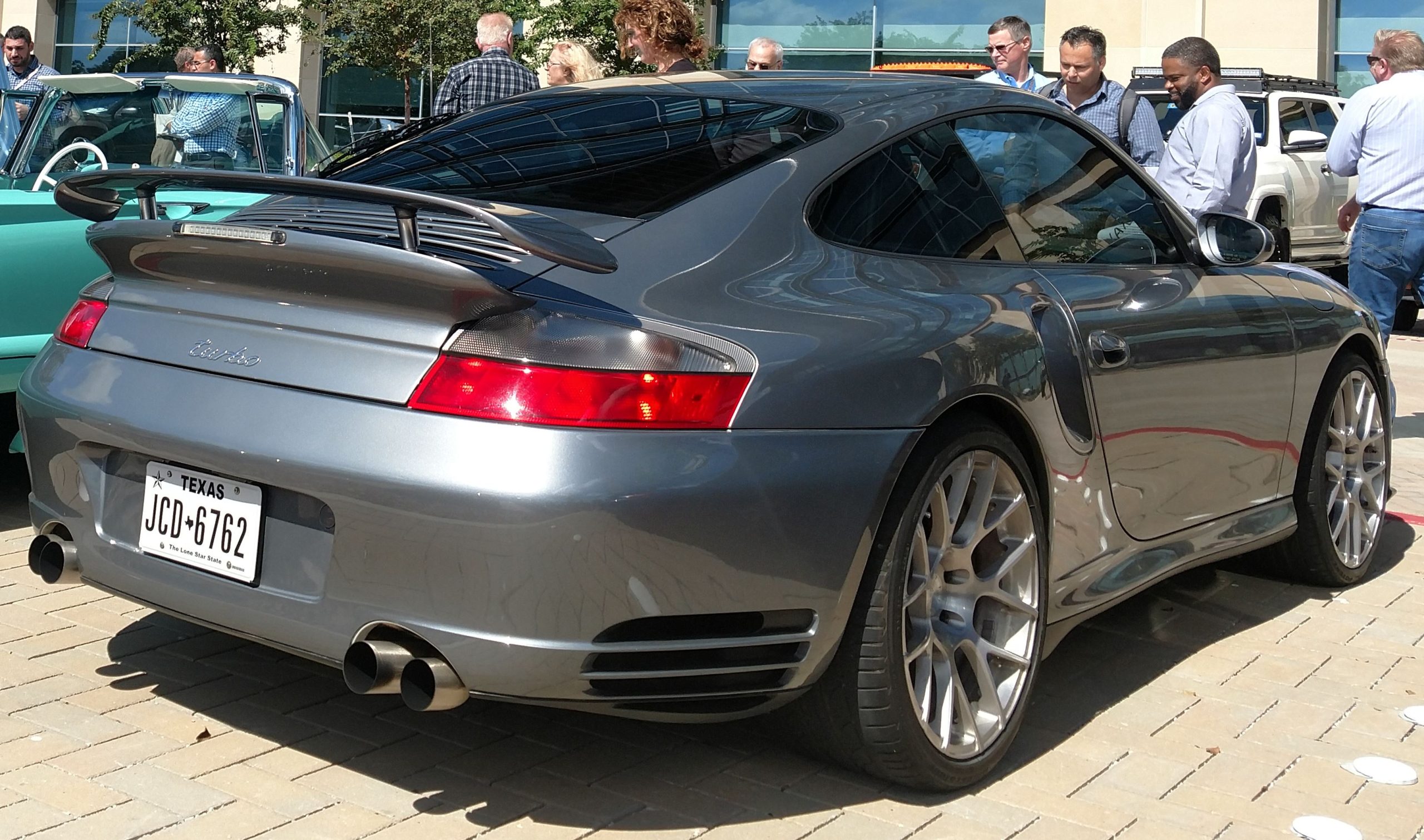 The eRam Kit™ consists of two self-contained electric rams with all fasteners, electrical connections and the tiny MicroModule Device™ which prevents the spoiler warning. No cutting, drilling or modification of any part of the car. Nearly plug and play! Easy installation. Easily maintained – no special tools needed. Easily modified (for instance to upgrade to taller rams or add Dust & Moisture Boots).

HEAVY DUTY, self-contained yet light weight electric rams have two built in limit switches in each ram – greatly reducing the risk of failure.  Works exactly like the factory system; extends by using the dash switch or upon reaching 75 MPH (100 K/h).  Retracts with the dash switch, or upon slowing to 37 MPH (5 K/h).

COST EFFECTIVE – the patented eRam Kit™ is far cheaper than a new factory mechanism- and will NEVER leak or fail due to the multiple problems associated with the hydraulic design. We carefully identified 13 failure points which can be reviewed HERE. Installation of the eRam Kit™ takes about 2 hours for anyone with mechanical skills. If you have ever changed brake pads, you can easily handle an eRam Kit™ installation. Most customers install the eRam Kit™ themselves. No major electrical modifications – the tiny MicroModule Device™ prevents the dreaded SPOILER FAILURE WARNING by communicating with the car’s computer.

Every eRam Kit™ comes preassembled – ready to bolt onto the 996 Turbo deck lid and wire up – works exactly the same as factory system. Why settle for standard.  We offer several wing heights when deployed: 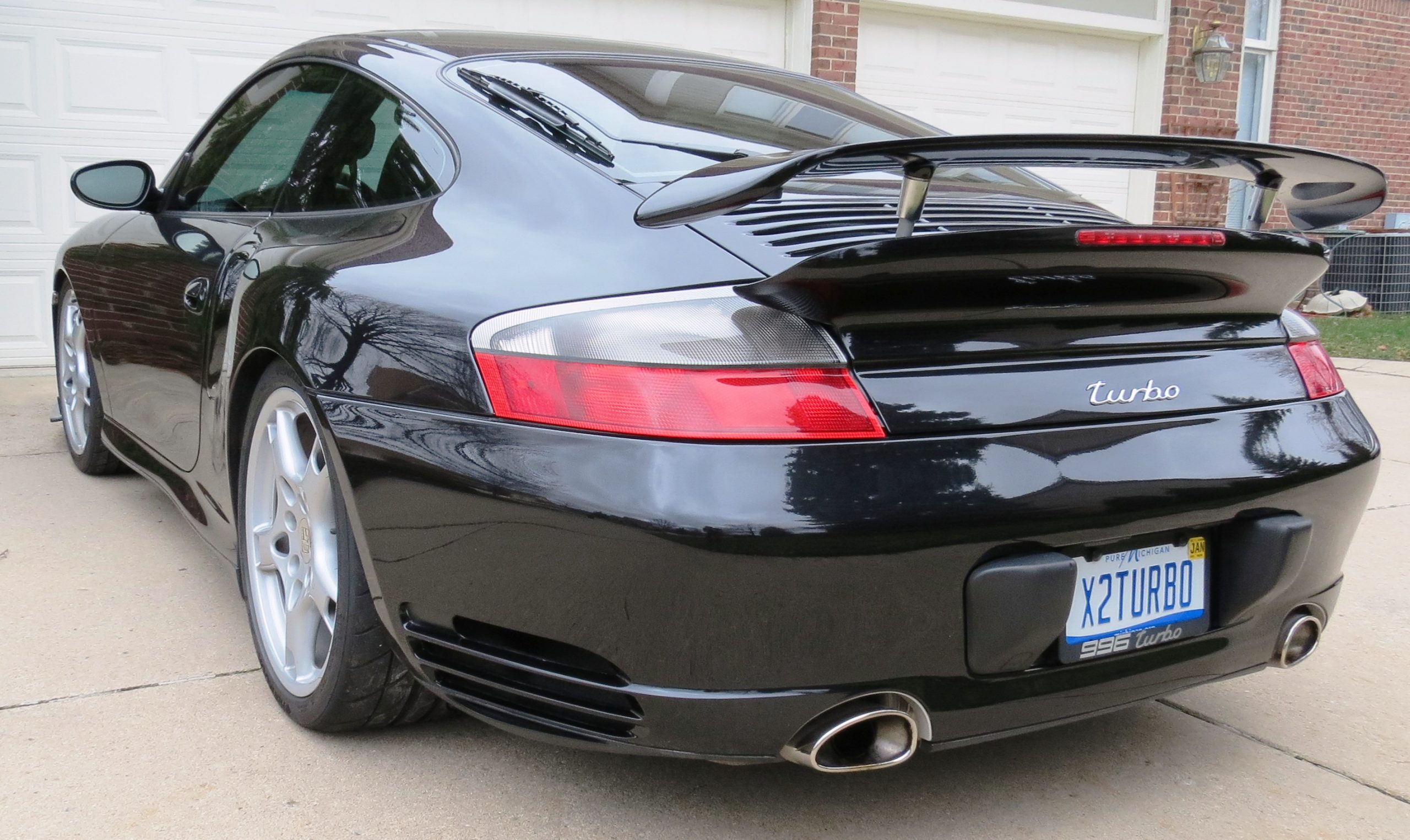 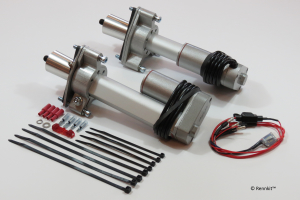 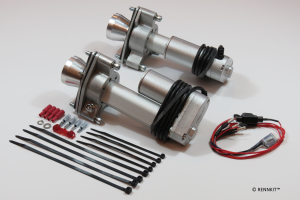 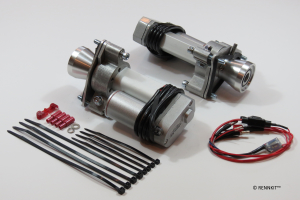 Options and accessories for the eRam Kit™ can be found HERE

Quit spending time, effort and money on the troublesome factory hydraulic wing mechanism. Why risk hydraulic failure and subsequent leak of corrosive (and flammable) Pentosin® power steering fluid all over your motor or back bumper? The original factory hydraulic system can be rebuilt, but can NEVER be prevented from failing or leaking fluid. There are far too many things that can and will go wrong.  The robust all-electric eRam Kit™ can never leak and eRam Kit™ parts are easily removed with standard tools for servicing or upgrading. 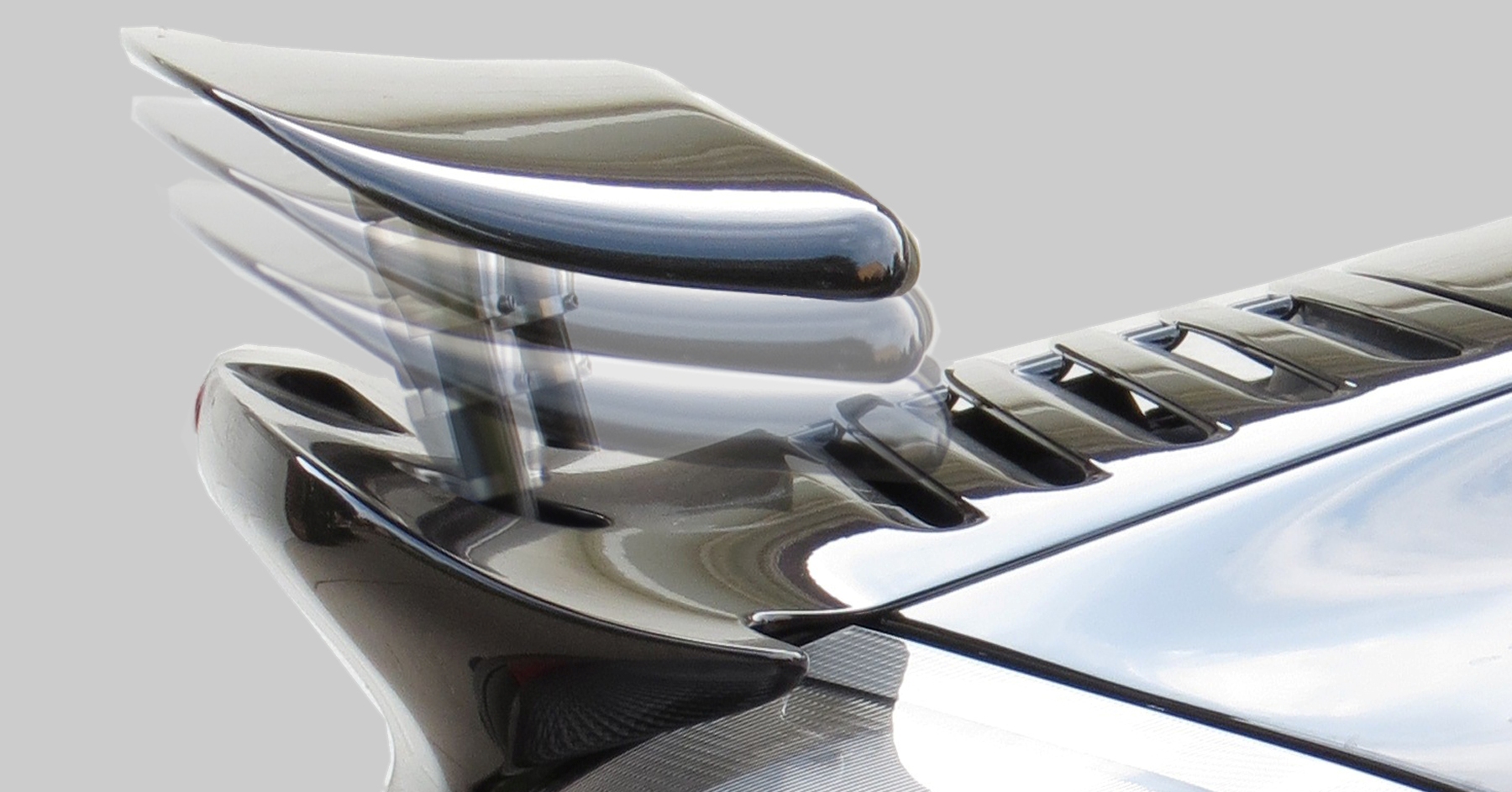 Wing operation with an eRam Kit™ is identical to the factory system; either by using the dash switch or when driving. Automatically deploys the wing up after reaching 75 MPH (120 km/h) and back down once at 37 MPH (60 km/h).  The self-contained motor driven electric rams are designed for harsh environments and are protected from moisture or water with a dual-seal design. Adding the recommended Dust & Moisture Boot set protects the rams from dust, moisture and harsh engine bay conditions. 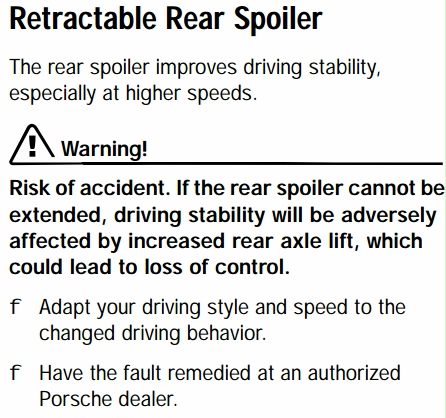 The eRam Kit™ is designed for harsh environmental conditions. We have a tight specification for the electric rams.  If you used your Turbo as a daily driver 5 days per week, and took 4 trips per day on a highway so the rams cycle 8 times, that would be 2,000 cycles per year, or 0.23 cycles per hour on average.

The patented eRam Kit™ has a very conservative 25% duty cycle.  Thus, you would be able to safely cycle your wing 300 times per hour.  This equates to a 1300:1 safety factor on an already conservative duty cycle!

Many eRam™ sets have been purchased by owners that track their Turbo.  Faster lap times have been reported.  The eRam™ kit performed flawlessly during multiple high speed trials over 200 MPH!  Track guys usually opt for the 4″ eRam™ system as they want the factory look when down, but the benefit of better down-force at the track.  Height is similar to the GT3 and GT4 wing.  Wing operation is stable with smooth and precise actuation.  Street or track, operation is exactly the same.  Note our track car has the flexible AERO-SPLITTER in the front (about $100 on eBay) – a nice balance to the higher rear wing!

Quicker lap times were achieved with the 4″ eRam Kit™ installed.  For the 996 Turbo, the wing rises 1.6″ [36mm] higher – in cleaner air for greater down-force at the back.

High speed track testing of the 4″ eRam™ set at the 2 mile Grattan Speedway, Michigan (left).  The 3″ eRam™ set was tested at the 2.4 mile Mid-Ohio Raceway (right): 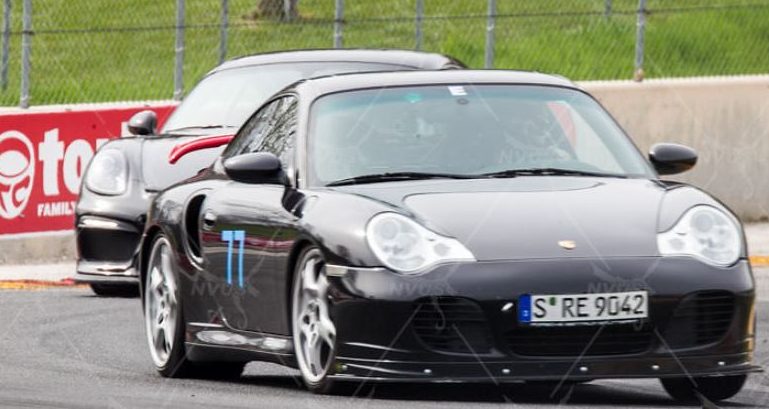 Our Heavy Duty airbox clips are upgraded compared with the factory clips – made of durable ABS plastic.  When installed they look very similar to the OEM clips.  Set of 4. 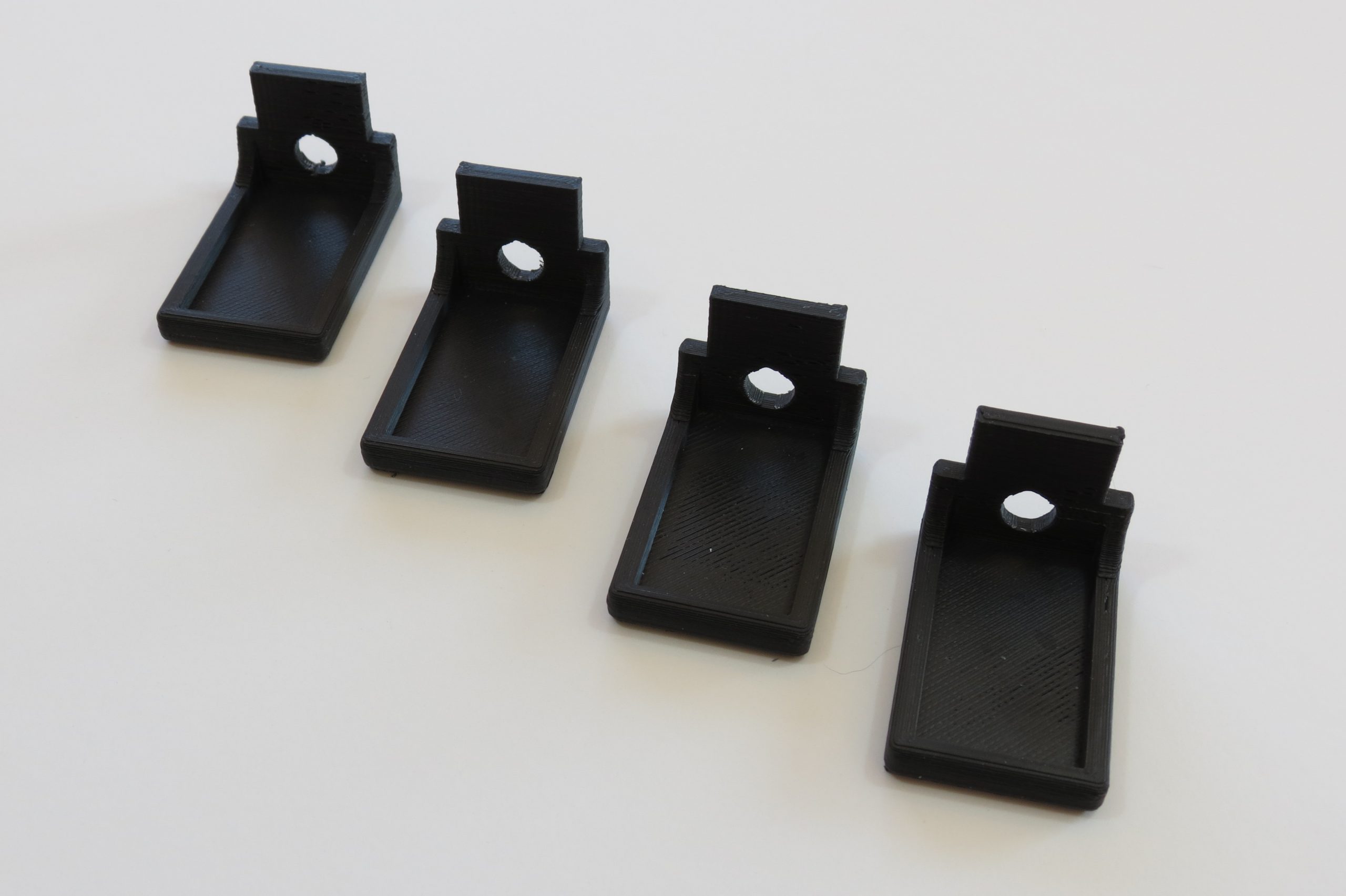 INSTALLATION SHOPS:
Rennkit® is building a network of PREFERRED SHOPS with the expertise to efficiently install eRam® kits.  You can find a growing list here:

If you are a Porsche® Specialist shop that would like to receive information  about providing the eRam™ kit for your 996 / 997 Turbo customers:

WARRANTY:  No worries, there is a 24 month limited warranty on all parts, and a money back guarantee for uninstalled kits (less nominal restocking fee) – click on PURCHASE and scroll down for details.